They should have listened to good advice, the sad fate of three little flies African Folktale story. 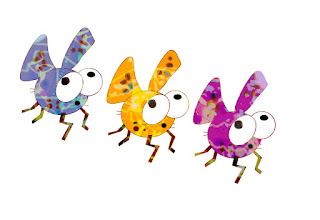 As the elders say, a fly had three children. When the children were old enough to take care of themselves, their mother called them to her and gave them some good and much needed advice.

To the eldest she said, "My child, beware of honey!"

The second child she cautioned, "Whatever you do, never drink palm wine!"

To the third and youngest she warned, "My son, never play with fire!"

One day the eldest of the children went to the woods, and there he found some wild honey. On looking at it, he shouted, "Ah, this is the very thing of which mother has forbidden me to eat! How I do wish to taste it! Just to taste of it cannot be so wrong!"

And he drew nearer and nearer, and at last he began to taste. "0, such delicious honey!" he exclaimed, when he discovered that it was sweet. "How silly of mother to forbid me eating it!"

Before he knew it, he stood right in it. After a while, he noticed that the honey stuck to his legs, and he tried to get away, but could not. He was stuck inside the honey and died.

The second child found some new palm wine that had collected in a pumpkin bowl. This too tasted sweet. At first, he only sipped of it.

Then he began to drink in gulps but, after a while, the wine started to ferment in his stomach, and he died.

The alluring beauty of a blazing fire attracted the third and youngest child. Repeatedly he fluttered around it; closer and closer he came to the treacherous flames, until at last he burned his wings, fell into the fire and died.

For over a week, the anxious and grief-stricken mother waited for the return of her children, but in vain.

She went to a witchdoctor and told him the cause of her grief. The witchdoctor, on hearing her story, looked at her with piercing eyes and then said, "Your children have disobeyed you and their disobedience has killed them!"

Therefore, these foolish little flies perished because of their disobedience. Had they believed and obeyed their mother, they would not have died.