African giraffe fact one, the world’s 97,000 giraffes live free on only one continent, Africa.

Below are 30 animal facts about Africa’s and the world’s tallest animal, the giraffe. 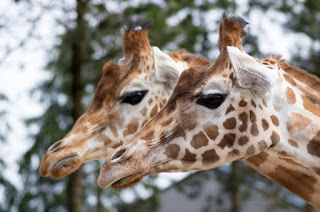 1. The giraffe is native to more than 15 African countries in central, eastern and southern Africa.

2. Giraffes are the world’s tallest mammals.

5. The coat of the giraffe is unique for each animal.

6. Giraffes have very long and flexible tongues that range from 18 to 20 inches.

7. The giraffe has a four-chambered stomach.

8. The giraffe has unusually elastic blood vessels with a series of valves that help offset the sudden buildup of blood and to prevent fainting when its head is raised, lowered, or swung quickly.

9. Giraffe’s horns are actually, knobs covered with skin and hair above the eyes that protect the head from injury. 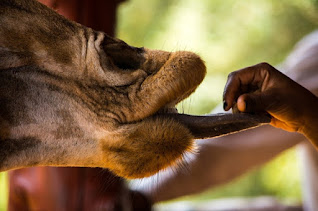 10. The giraffe's neck contains only seven vertebrae and it measures over 5 feet in length.

11. Giraffes have sloped backs because the back legs are 10 percent shorter than the front legs.

13. The giraffe lives in dry savannah woodland, wherever trees occur.

16. Giraffe occasionally eat grass and fruits of various trees and shrubs, but their principal food source are the acacia tree.

17. Although they drink water when it is available, they can survive where it is scarce.

18. Unless they are still under the care of their mothers, males are seldom found in these herds.

19. Once old enough to care for themselves the young males’ branch off and form bachelor herds.

20. Mature males leave the herd and tend to live alone until it is time to mate.

21. A strong male will often mate with an entire herd of females.

22.Giraffe females form what is known as nursery groups helping each other out, watching the young while others feed.

23. Female giraffes tend to bond and form small herds of ten to twelve.

25. The giraffe bear a single young.

28. A quarter of infants survive their first year of life.

29. Although few predators attack adult giraffes, lions, hyenas, and leopards take their toll on the young.

30. The Giraffes life expectancy is 28 years.

Did you know? Giraffes are easily killed and poaching continues today on some African hunting safaris.