In Africa selling albino body parts is a money-making business. 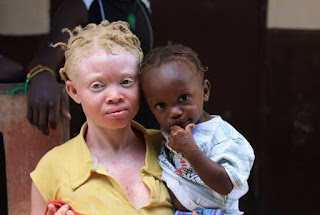 African albinos are killed, dismembered, graves robbed because charms made from albino body parts are believed to bring good luck, fortune and money​.

Issues related to people with Albinism

Women with albinism in Tanzania, Burundi, Ghana, Malawi, Kenya, Nigeria, and Mozambique are often targets of sexual violence. This is owing to the prevalent myth that sexual intercourse with them can bring a cure to HIV / AIDs and confer good luck. This myth not only exposes them to violence but also to contracting various sexually transmitted infections and unwanted pregnancies. In addition, infants, children, women, and men are experiencing gross human rights violations where persons with albinism have been abducted, killed and exhumed.
Infants are often killed in a practice called infanticide .Infanticide or infant homicide is the intentional killing of infants. Infants born with albinism are seen as a curse to the community because of the mystical associations with albinism. Albinism is seen as a mystical disease, therefore, demand for body parts for protection and good luck fetch a high price.
People with albinism are seen as not having a right to life because they are not human beings. Cruel attacks, mutilations and trafficking of body parts against persons with albinism, in particular children, girls, and women have been reported across the region, UN officials during country visits, indicate over 600 attacks across 28 African countries since 2006.
Witchcraft practice, in particular, the use of body parts of persons with albinism for muti or juju, is undeniably one of the main root causes of attacks against persons with albinism, attacks against persons of albinism are referred to as ritual killings. “Persons with albinism are victims of ritual attacks. It is believed that their body parts can bring, inter alia, wealth and good luck when used in potions made by practitioners of witchcraft.

Throughout Africa, albinism is much more widespread than the rest of the world. Tanzania has one of the largest populations of people with Albinism in the world with an estimated 170,000. In the heart of Lake Victoria, Ukerewe Island is home to a large community of people with albinism.
In Tanzania, people with albinism are facing the daily horror of a rapidly growing industry in the sale of albino body parts. More than 70people with albinism have been killed since 2000. In Tanzania, people with albinism are killed and dismembered due to a widespread belief that charms made from their body parts bring good fortune and prosperity. People with Albinism are targeted for their legs, hands, fingers, heads, and genitals.
There is a great black market demand for the body parts of albino people selling for around $600 US dollars according to 3news. On 1-1-15 Police in Tanzania arrested four people over the kidnapping of an albino girl from her home in the Mwanza region of Tanzania; her father is accused of orchestrating the offense.

At least 10 people with albinism remain missing in Malawi, in one horrifying case in Malawi, MacDonald Masambuka, 22, went missing in February. His body was discovered in April. Local media reported that his legs and arms had been removed. Twelve people among them a police officer and a priest entered pleas on a series of charges that include murder and causing harm to persons with disabilities.
Another case in the north of the country, a 55-year-old man with albinism was repeatedly stabbed in front of his child, before his arms, were amputated by his attackers. Killings and attacks often spike during election periods “because of false beliefs that their body parts can bring good luck and political power when used in witchcraft-related rituals.
Since 2014, 150 cases of killings, attacks and other human rights violations against persons with albinism have been reported in the southeast African nation. A United Nations human rights expert Ikponwosa Ero, warned that the atrocities faced by persons with albinism in Malawi render them “an endangered people group facing the risk of systemic extinction over time if nothing is done.”
Women and Albinism in Africa

The mutations in at least 12 different genes have been identified in different types of albinism in humans. Most people with albinism have pale skin, eye conditions, and are sensitive to the sun; this occurs in about 1 in 20,000 people with Africa having the highest rate of albinism.
There are two types; Oculocutaneous albinism (OCA) involves the eyes, hair, and skin, whereas in ocular albinism (OA) visual involvement is accompanied by only slightly reduced pigmentation of skin and hair. There are multiple forms of oculocutaneous albinism.
Skin can be protected and eye conditions can be treated, however, albinos have an increased risk of skin cancer. Melanin plays a major protective role against ultraviolet light and persons with albinism are subject to severe sunburn and eventual development of skin cancers induced by long-term solar irradiation, particularly in parts of the world with high rates of sun exposure. The sun is extremely damaging for their skin, with the average life expectancy of 30 years.

People with Albinism most often have white or light skin and hair, and eye color varying from dull gray-blue to brown. In one kind of albinism, (OA), only eye color is affected.
The pink eyes often associated with albinism are due to the reflection from blood vessels behind the retina. With pigment lacking in the iris of the eyes, the reflection seen is similar to red-eye in a flash photograph.

The film In the Shadow of the Sun tells the story of two men with albinism pursuing their dreams in the face of prejudice and fear in Tanzania. The film follows their lives before and during an outbreak of brutal ritual killings that sweep across the country. Josephat lives in Dar Es Salaam with his wife Sabella and their two children and has spent his life as an albino rights campaigner fighting the discrimination that he comes up against each day.


Links to African history and facts