How Onye the Chipmunk Won His Wife is a love tale African Folktale telling the story of how a determined gent won his wife’s Okonjo hand in marriage with courage, intelligence, and persistence.

How Onye the Chipmunk Won His Wife African Folktale

When the father of Okonjo was dying, he told his wife that only he who chopped down the mahogany tree could marry his daughter.

By and by, an Elephant arrived, and, sitting down in the town, asked the girl for a drink of water. She poured him some water and gave it to him, and he then asked her, "Are you married?" and she replied, "No, I am not yet married." The Elephant said, "I will marry you." Whereupon the mother called out, "You can marry her; but you must first cut down the mahogany tree."

The Elephant took an axe and cut, cut, cut until he was tired, and then went and rested so long that when he went again to the tree it was just as it was before he cut it. When the Elephant saw that, he threw down the axe, saying, "It is not my wedding, the woman is too much trouble." 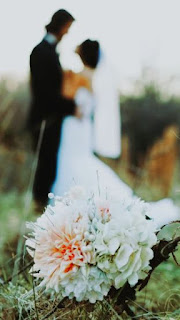 As the Elephant was going away, he met the Buffalo, and told him all about it his problem, saying, "I came to marry, but I am not able to cut down the mahogany tree."

Then Buffalo picked up the axe and cut, cut, cut, and then rested under the verandah of the house. When he returned to the tree, he found it had grown again to its former size. Down he threw the axe and ran away.

As the Buffalo was running away, a Lion shouted out, "Where have you come from?" The Buffalo stopped and told him all his troubles. "Oh," said the Lion, "give me an axe, I'll marry her." However, the same thing happened to him, and to the Hyena, and to the Leopard also. They all cut at the tree, got tired, rested too long, and each ran away, saying, "I came to marry, but the girl is not worth the trouble."

As the Leopard was running away, Onye the Chipmunk asked him "What is the matter?" and the Leopard growled, "I went to marry a woman, but whoever marries her must cut down a mahogany tree."

When the mother saw the tree fall, she said, "Onye, you can sleep here, and in the morning take your wife."

In the morning, they cut up six pigs and twenty loaves of bread, then Onye took his wife, and they started on their journey to his town.

They reached a stream where they camped for a time, and while there the Elephant arrived, and Onye said to him "See, this is my wife."

When the Elephant heard that, he began to beat Onye, but he suddenly entered his trunk and gave him such pain that the Elephant cried, "Come out!"

Onye came out and went off with his wife.

They reached another town, and while resting and eating there, the Buffalo arrived. "Welcome to you," said Onye. However, the Buffalo did not want his welcome, and said he had married the woman, and when Onye would not give her up, the Buffalo hit him on the back with a big stick.

Onye entered the Buffalo's ear and gave him so much pain that he bellowed: "Come out!" Onye came out went away with his wife.

As they journeyed along they met the Hyena, who said "Why, that is my wife!" and when Onye denied it, the Hyena became very angry, and beat Onye and made him cry.

Onye called his cousins, the Squirrels, who came and fought the Hyena, and while they were fighting, he hurried off with his wife.

They travelled until they came to a high plateau, where they met a large Rat, who said, "Give me that woman!" To him Onye replied, “I cannot give her, for I love her!"

"Very well," answered the Rat; "let us go to my home and I will give you some beer."

While sitting there Onye took another rat head out of his bag and placed it on the table.

"Where did you get that head from?" asked the Rat.

"Oh," boasted Onye,” I have eaten nine rats, and you will be the tenth." So alarmed was the Rat that he ran away and never said goodbye.

At last, Onye reached his town and gave his wife a house.

However, one day the Leopard paid a visit to Onye, and said " Onye, let us work a farm together." This they did, and while Onye was watching the corn one day, the Leopard tried to run away with his wife.

Onye upon hearing this invited the Leopard to drink beer at his house, and while they were drinking, Onye took out of his bag a Leopard's head.

"Where did you get that?" asked the Leopard.

"Down in the drinking-booth I killed and ate nine," said Onye, and you will be the tenth."

The Leopard was so frightened at this, that when Onye told him to get into the pot, he went right in at once.

Onye put in the lid on the pot, and then put it on the fire, and thus the Leopard died.

Onye was rewarded for his courage, intelligence, and persistence by living happily ever after with the love and devotion of his beautiful wife Okonjo and tells to tale of how love takes no less than everything to his entire village.