The Kenyan flower trade earned millions as the flower and plant industry blossoms in Kenya and seeded in world gardens. 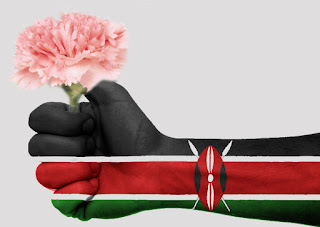 The African floriculture business is one of the continent's most profitable businesses and Kenya is the largest grower of cut flowers.

Carnations are the official flower of mother’s day and after roses are the most popular flower grown in Kenya horticulture. Carnations in Kenya and throughout the world are available in a wide range of colors; red, white, yellow, orange, and pink.

Carnations are one of the oldest cut flowers in the world; pink is one of the most popular colors for carnations. Horticulture has been one of the top GDP earners for Kenya contributing 1.45% in 2015.

The flower industry in 2015 earned Kenya Shillings 62 billion which equals around 59 million US dollars, exporting 123 metric tons. The floral industry is one of the highest industries in Kenya and a number of developing African countries.

Kenya lies on both sides of the equator on the eastern coast of Africa. Kenya's inland water bodies cover some 4,200 miles, the bulk of this in Lake Victoria and Lake Turkana.

The country's flower power is attributed to its sunny climate, which enables high-quality blossoms to be grown year-round without the need for expensive-to-run greenhouses.

Rainfall peaks in most areas are in November and April. Kenya is the third largest exporter of cut flowers in the world, accounting for around 35% of all sales in the European Union.

Usually, the climate is warm and humid at the coast, cool and humid in the central highlands, and hot and dry in the north and east. Across most of the country, rainfall is strongly seasonal, although its pattern, timing and extent vary greatly from place to place and from year to year.

The major flower varieties grown and exported from Kenya are roses, carnations and tuberoses. Around 50% of exported flowers are sold through the Dutch Auctions.

The main markets for cut flowers from Kenya are the European Union in particular Germany, Netherlands, United Kingdom, Sweden, Italy, Switzerland and France. Other growing destinations include Japan, Russia, and USA.

The carnation, Dianthus caryophyllus is generally supposed to have obtained its name from the flesh-color of its flowers; but it was more correctly spelt by old writers, Coronation, as representing the headdress of the early herbalists, and so called from its flowers being used in the classic garland or wreath for a person's head during a coronation ceremony.

From the English poet and author Chaucer, we learn that the carnation flower was formerly called the Clove Gilliflower, and that it was cultivated in English gardens in Edward the Third’s reign. In those days, it was used to give a spicy flavor to the wine and beer.

The name Gilliflower has reference to the spicy odor of the flower, which was used as a substitute for the costly Indian cloves in flavoring food dishes as well as liquors. The Gilliflower was also thought to possess medicinal properties.

The old English name of Gilliflower was familiarly given to several other plants dear to early English gardeners: thus we find it applied to the Carnation, the Pink, the Rocket, the Wall-flower, the Ragged Robin, and some others.

The Carnation is under the power of Jupiter because Jupiter is called the king of the planets because it is named after the king of gods and is the largest planet in the solar system.


How Do Carnations Get Their Color.

Carnations naturally grow in a wide variety of colors including pink, white, red, yellow, and scarlet. Flower colors of red, pink, blue and purple come mainly from the pigments called anthocyanins, which are in the class of chemicals called flavonoids what gives plants their color.

Many flavonoids are easily recognized as flower pigments, however, their occurrence is not restricted to flowers but are found in all parts of plants. Flavonoids are also abundantly found in foods and beverages of plant origin, such as fruits, vegetables, tea, cocoa, and wine.

Flavonoids play a variety of biological activities in plants as they are responsible for the color and aroma of flowers, and in fruits to attract pollinators such as bees. Flavonoids protect plants from stresses and act as a UV filter, frost hardiness, and drought resistance.

Other pigments are carotenoids, found in tomatoes and carrots that provide yellow, red and orange in the plastids. Plastids in plant cells are necessary for essential life processes, like photosynthesis and food storage.