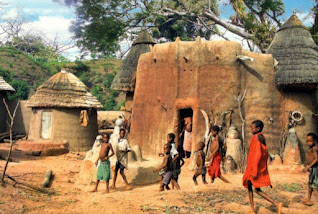 About African Mud Houses
Over half of the people of Togo practice indigenous religious beliefs. Takienta Mud houses are a national symbol of Togo, the people of Togo believe nature is strongly associated with rituals and beliefs of their society. Central to indigenous traditions is an awareness of the integral and whole relationship of symbolic and material life and African mud homes are key to the Togolese web of human activities.

About African Mud Houses Koutammakou, the Land of the Batammariba

The Koutammakou landscape in north-eastern Togo, which extends into neighbouring Benin, is home to the Batammariba whose remarkable mud houses called Takienta have come to be seen as a symbol of Togo.


Koutammakou is the name of a large semi-mountainous region located in north-eastern Togo and which extends into neighboring Benin. Koutammakou of Togo covers approximately 124,000 acres or 50,000 hectares and joins the border of Benin for 9 miles or 15 km.

Koutammakou is a unique example of mud houses made by a people in constant search of harmony between man and the surrounding nature. The Koutammakou cultural landscape possesses a particular characteristic, the takienta, is a basic family dwelling where technical, utilitarian and symbolic elements are combined, is a unique mud house. Although many dwellings of the region possess fairly strong symbolic dimensions, none possess such a close interrelationship between symbolism, function and technique.

This particular type of dwelling, which owes its aesthetic aspect to the spectacular shapes, is the result of the creative genius of the Batammariba: those who model the earth or, by extension, the good masons according to the translation of some anthropologists. Education, centralization of administrative power, religions, tourism, monetary system and the appearance of new needs have all exercised their influence.

Despite these aggressions that tend to unsettle the Tammari society, very strong and motivated centres exist in all the villages that constitute this melting-pot where the essential elements of the Tammari culture mix and persist throughout time and space. Therefore, despite the threat of globalization, expressions of culture and identity persist.

Therefore, and in spite of the development of small urban centres, (almost all at Nodoba), it is always the original landscape that can be observed today, with villages in which the houses are each located in the middle of their cultivated plots, spaced out and independent. The natural space is also very present, even though it would be desirable that some of its elements be reconstituted – it should be noted that this mainly concerns the « neutral » natural areas. Indeed, the authenticity of all the sacred areas remains intact.

The Koutammakou, as an evolving living landscape, exhibits all the facets of an agricultural society working in harmony with the landscape and where nature underpins beliefs, rituals and everyday life. It comprises tangible elements such as sacred rocks, forests, houses, fields, sources of construction materials, wild and domesticated animals, as well as intangible elements including beliefs, craft techniques, songs, dances, traditional sports, and of course constructing their famous house of mud.

The Koutammakou is an outstanding example of a system of traditional settlement house of mud that is still living and dynamic, and subject to traditional and sustainable systems and practices, and which reflects the singular culture of the Batammariba, particularly the “takienta” tower houses. The Koutammakou is an eloquent testimony to the strength of spiritual association between people and the landscape, as manifested in the harmony between the Batammariba and their natural surroundings.