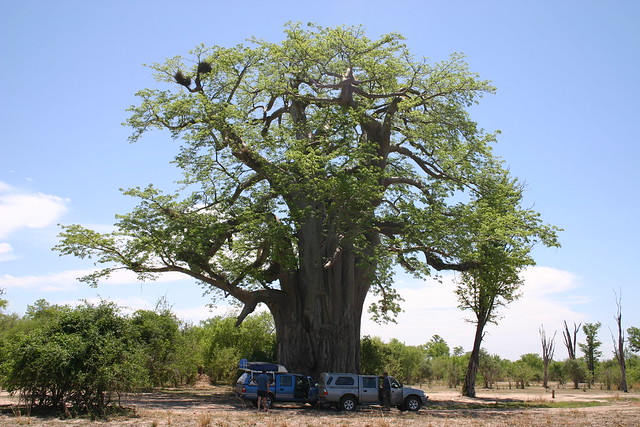 Top 5 iconic trees from across the majestic African continent.

Listen to the trees of majestic Africa

Common names for the baobab tree are cream of tartar tree, monkey-bread tree, tabaldi, and mowana. The gigantic trunk of the baobab tree leads upwards to branches resembling the roots of a tree, which is why it has often been referred to as the upside-down tree. The baobab is also known as the tree of life. It is also legendary for its gigantic size growing to more than 70 feet high and 35 feet in diameter, its canopy spreading to 235 feet.

The Baobab tree is a strange looking tree that grows in low-lying areas in Africa and Australia. It can grow to enormous sizes and carbon dating indicates that they may live to be 3,000 years old. One ancient hollow Baobab tree in Zimbabwe is so large that up to 40 people can shelter inside its trunk. Various Baobabs have been used as a shop, a prison, a house, a storage barn and a bus shelter. The tree is certainly very different from any other. The trunk is smooth and shiny, not at all like the bark of other trees, and it is pinkish grey or sometimes copper colored.

The quiver tree also known as kokerboom, is a species of aloe indigenous to South Africa northern cape region. Quiver technically botanically speaking is not a tree but an aloe plant. The botanical name is Aloe Dichotoma. Dichotoma refers to the forked branches of the plant. Known as Choje to the indigenous San people, the quiver tree gets its name, Kokerboom, from the San practice of hollowing out the tubular branches of Aloe dichotoma to form quivers for their arrows.

Koker is the South African Afrikaans word for quiver. The quiver tree is a stout tree up to 29 feet or 9 meters high with a smooth trunk which can be up to one metre in diameter at ground level. The quiver tree propagates only by seeds. They have their first flowers when they are about 20 to 30 years old. The flowers are branched panicles up to 9 inches or 30 cm tall from the base of the peduncle to the apex of the terminal of the racem. The flowers have a bright yellow colour. The flowering-season is in the winter during June and July. The big trees in the forest are between 200 and 300 years old.

The tree is also found in Mpumalanga, Limpopo, North-West Province, Mozambique, and into tropical Africa. It has a spreading canopy and is extremely slow growing. The snakeskin-like bark is one of the main features that make identification easier throughout the season.

Dead branches and shoots often remain on a matured tree. The colour of the trunk is pale grey to white. The leathery leaves are arranged opposite each other. The flowers are yellowish cream-coloured and have a sweet fragrance. They are produced from November to March. The leadwood produces 4-winged fruit, which are yellowish green and turn pale red when mature from February to June. Parts of this tree are used by various tribes in a number of ways: smoke that comes from the burning leaves has been used to relieve coughs, colds and chest complaints.

The flowers can also be used as a cough mixture. The leaves are believed to have magical powers. For treatment of diarrhoea and stomach pains, root decoctions are used. A combination of roots and leaves are taken against bilharzia. Root bark that is boiled in water is used for tanning leather. The gum that exudes from damaged areas on the stem is edible and forms part of the diet of the Bushmen. Leadwood ash is used as a toothpaste.

Leadwood wood is very hard and tough, and burns very slowly with intense heat. Africans used this wood to make hoes before metal was discovered. The trunk was used to build an enclosure called a kraal and grain stamping mortars and these days it is used for furniture and sculptures. The tree has special cultural and religious importance to the Ovambo people of Namibia. The leaves and fruits are used in white magic.


Kigelia africana better known as the Sausage Tree is a perennial tree found from Sub Saharan Africa south to the northern reaches of South Africa. The tree has long sausage shaped fruits up to 24 inches in length growing at the ends of long stems. The sausage tree fruit, while not palatable for humans, is popular with hippos, baboons, meyer's parrots and giraffes.

The blood-red flowers of the South African sausage tree bloom at night on long, ropelike stalks that hang down from the limbs of this tropical tree. The fragrant, nectar-rich blossoms are pollinated by bats, insects and sunbirds in their native habitat. The mature fruits dangle from the long stalks like giant sausages.

There may be up to 2 feet or 0.6 meters long and weigh up to 15 pounds or 6.8 kg.The rind of the fruit is used to aid the fermentation of the local brews. The pods are kept as religious charms and fetishes, and produce a red dye when boiled. Ointment is made from the fruit and is used to treat skin conditions.

Mekoro are dugouts made of the trunks and large roots of the sausage trees. These canoes have been used for thousands of years as transportation in the Okavango River delta in Botswana.

The sausages cannot be eaten but the skin is ground to a pulp and used externally for medicine. Its most important use is for the cure of skin ailments especially skin cancers. The fruit is burnt to ashes and pounded by a mortar with oil and water to make a paste to apply to the skin.


You give me Fever Tree

Vachellia xanthophloea previously known as Acacia xanthophloea is a tree in the Fabaceae family and is commonly known in English as the fever tree is also known as olerai, kimwea, murera, and mwelele. The fever tree is native to eastern and southern Africa found in Botswana, Kenya, Malawi, Mozambique, Somalia, South Africa, eSwatini, Tanzania, Zambia, and Zimbabwe.

The healing power of fever tree only became world renowned in the 1820's when officers of the British Army in India, in an attempt to ward off malaria, mixed quinine, the extract from the bark of the fever-tree with sugar and water. It acquired its common name of Fever tree because it thrives in swampy areas, along riverbanks, in seasonally flooded areas or at the edge of vleis, in areas where malaria was a scourge and the pioneers thought that it was the trees that inflicted the disease upon those who passed near to it.

Did you know?
Arbor Day is a holiday in which individuals and groups are encouraged to plant trees.