Monitoring the disappearing Mountain Gorillas in Rwanda and Uganda.

Endangered mountain gorillas are threatened by habitat loss, poaching, disease and war in forested volcanoes that straddle the borders of Rwanda, Uganda and the Democratic Republic of Congo. 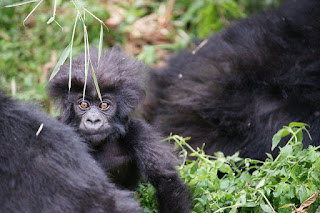 Rwanda is one of only three countries in the world where the critically endangered mountain gorillas live in the wild.

The endangered mountain gorilla is an herbivore living in the Virungas, a cluster of forested volcanoes that straddle the borders of Rwanda, Uganda and the Democratic Republic of Congo and spans four national parks, Bwindi Impenetrable National Park, Mgahinga Gorilla National Park, Volcanoes National Park, and Virunga National Park.

The mountain gorilla is a high-altitude race of the eastern gorilla, the larger of Africa’s two gorilla species, and distinguished by its dense fur, which protects it from the colder highlands climate. It lives in troops of 10-30 creatures, over which a silver-back male, named for his cape of white hair reigns. Silver-back males can sometimes weigh up to 400 pounds and stand 6 feet tall, females, 215 pounds and 5 feet tall.

If you want to experience gorilla trekking in Rwanda your first requirement is a permit, which will cost around $350- $750 in Rwanda or Uganda. The gorilla permit will get you one hour with the gorillas in their natural high-altitude surroundings. Rwanda’s volcanoes national park is home to 10 mountain gorilla families who can be visited by one group of eight visiting a day.