Black-eyed peas and Collard Greens for luck and money.

If you love in the South in The USA, there is one New Year traditions that you just cannot ignore; cooking black-eyed peas and collard greens for a wonderful year.
So why do the US Southerners eat black-eyed peas and greens to ring in the New Year?  The tradition spread after the Civil War. During General Sherman's march, the Union Army pillaged the Confederates' food supplies but left the peas and pork believing they were food for the animals and not for human consumption. The Southern soldiers thus felt lucky to have these supplies to get them through the cold winter.

Black-eyed peas, dried significantly expand in volume when cooked and symbolize expanding good look throughout the year. Collard green are green and the color of U.S. money so when you eat collard greens on New Year’s Day you will have money all year long. There is evidence that people ate black-eyed peas for luck as early as 500 A.D. as a part of the Jewish holiday Rosh Hashanah, the Jewish New Year.

However, the tradition of eating black-eyed peas with rice is African in origin and spread throughout the South, especially in the Carolinas, in the form of pilaus or rice dishes simmered for a long time with chicken or shrimp. When black-eyed peas were added to the pilau, it became Hoppin’ John.

Black-eyed peas also commonly referred to as Cowpeas or niébé originated in Africa and are widely grown around the world. Niébé, a variety of cowpea is a drought-resistant bean that thrives even in the dry, arid soils of the Sahel. The niébé bean improves soil quality in the Sahel by fixing nutrients since its nitrogen requirements low; its roots form nodules that contribute to the fixation of atmospheric nitrogen. 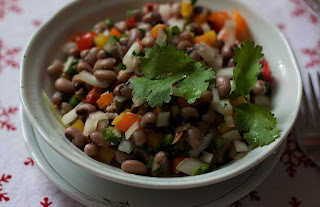 Throughout Africa black-eyed peas are known as cowpeas.

Cowpeas are the most important seed legume in the tropical savanna areas of Africa.

Black-eyed peas or cowpeas are grown and eaten extensively in Asia, South and Central America, the Caribbean, the United States, the Middle East, and Southern Europe.

Cowpea plays an important role in the livelihoods of many rural families in Africa, Latin America, and Asia by providing nutrients deficient in cereals.

Cowpeas provide the bulk of proteins and vitamins such as folic acid, micro-elements such as iron, calcium, zinc and also carbohydrates in many food deprived areas of the world.

Cowpea is an important staple crop in sub-Saharan Africa, especially in arid Savannahs of West Africa and the Sahel.

Cowpeas are a valuable source of vegetable protein, vitamins as well as valuable income.

Western and Central Africa is the leading cowpea producing regions in the world producing around 64 percent of the estimated 3 million tons of cowpea seed produced each year.

Niébé is a variety of cowpea grown by many women small farmers, throughout West Africa.

Black-eyed peas get their name from their characteristic appearance of a black dot in the middle of a cream-colored bean.

The black-eyed pea is believed to have been introduced to the United States through the African slave trade.

Black-eyed peas are said to bring good luck when eaten on New Year's Day in the Southern US. The peas represent good luck and are served with collard greens that represent money.