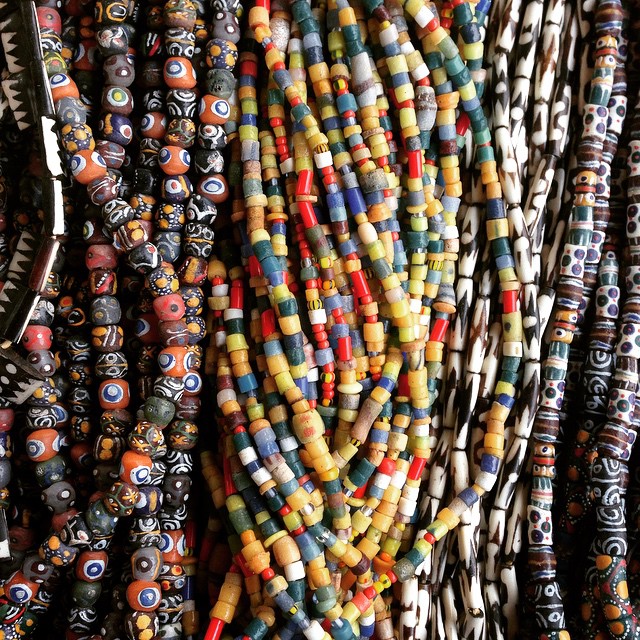 Seven maidens set out one morning to draw water from the river, and when their pitchers were filled, six sat down on the bank to wait for the seventh, which had gone a little farther on. While she was absent her companions took off their beads and hid them in the sand, saying, "When our sister comes back, let us tell her that we have thrown them into the river, and see if she will do likewise."

Therefore, when she returned, they called out, "Sister, we have thrown our beads into the river! Do likewise, and see what will happen!"

Feeling curious, the girl flung hers into the water, when immediately her companions dug up theirs from beneath the sand, and, laughing, went home carrying their water jars upon their heads.

The girl was in deep distress at losing her beautiful ornaments for nothing, so she went to the edge of the water, crying, "River, River! Show me my beads, which I flung into your depths."

The river answered "Pass on."

The girl followed the riverbank till she came to another river, larger and deeper than the one she had left, and gazing into it, she cried again: "River! River! Show me my beads."

At first, there was no answer, but when she spoke once more the waters of the river divided, and a voice said: "Enter! Your beads are here."

The girl dived from the bank and beneath the waters; she found a hut with a piece of ground in front of it. Out of the hut came a poor old woman, hopping on one leg. She had only one arm and was covered with sores. The girl looked at her with pitying eyes as the poor creature stood in front of her.

"Why do you not laugh at me, little sister?" asked the old woman. "See how miserable I am."

"I am sorry for you," answered the girl.

"Then come and dress my wounds," said the woman; and while the girl did this she told her that she was the slave of a cruel monstrous chief who hunted for human beings and devoured them.

"He has eaten my arm and one leg," said she, "but he does not kill me entirely because he needs me to cook for him. If he catches you, he will kill you and eat you, but because you have been kind to me, little sister, I will protect you."

When the girl had dressed her wounds, the old woman fetched food and set it before her, saying, "Eat this, and when you have finished, hide behind this wall, for the Chief will soon be here, and if he has caught nothing for supper he will be furious and devour you. Beware when you hear a light wind rise, and a few drops of rainfall. These are the signs of his coming."

The girl had not long been in hiding when the wind rose and a few raindrops fell pattering on to the earth. Then came the Chief, and he was indeed terrible to look upon, for his mouth was red, and he had tusks like a wild pig, while over his shoulders fell long matted hair. He had brought nothing back from his hunting, and he was hungry. As he entered the hut, he said to the old woman, "I smell a human being. Where are you hiding him?"

"I am hiding nobody," said the old woman. "You can finish eating me, if you like; there is nobody else in the house."

Now, hungry as he was, the Chief did not wish to eat the old woman, so he lay down and went to sleep, snoring so that he shook the hut. Next morning he was awake early, and went off hunting again.

As soon as he had gone, the old woman went to the girl and adorned her with beads far more lovely than those she had thrown into the river. She gave her beautiful brass rings for her ankles, and bracelets of fine workmanship, wrapping round her a rich mantle of skins fit for a royal princess. Then she put into her hand a small round stone, which she begged her keep safe until she was a mile from the river, when she must throw it over her shoulder without looking back.

"If you do as I bid you,' said the old woman, the Chief will not catch you; but beware of looking backward, or you will be lost. Go in peace," she went on, blessing the girl, "and may the rain fall upon you!"

When the young girl was a mile away from the Chief's river, she threw back the stone that the old woman had given her. She had now reached the river into which she had flung her beads, and there, sitting on the bank, was her younger sister, who sprang up with joy at sight of her whom she had given up as lost.

"We have sought you everywhere," she cried, "and we feared you were dead."

"Give me water from your pitcher," said the elder girl; and when she had quench her thirst, they set out on their homeward way.

There was great rejoicing when she entered the village, and the girls who had persuaded her to throw away her beads crowded round her, glad to see that the trick that they had played her had not caused her death.

However, when they saw how richly she was dressed, some were jealous, and asked her she got all the fine things she wore. Then the girl told them what had happened to her, and how the old woman had saved her from the Chief.

When she had finished her story, the six girls talked among themselves, saying, "It is just like her to be so lucky. It would never happen to any of us."

"Why not?" asked one. "Let us go to the river, and perhaps the old woman will give us beads and ornaments of brass."

Early next morning, when everyone else in the village was still sleeping, the six maidens set out, and by and by reached the Chief's river. Nevertheless, when the old woman came hopping out on one leg, they laughed at her rudely. "Come dress my wounds," said she; but at this, they only laughed the more.

While they were mocking the poor creature, a light wind rose and drops of rain began to fall. The Chief was coming, but the old woman did not warn the cruel girls of his approach.

When he saw them standing there before his hut, the monster caught first one and then the other, until all six were his prisoners. Then he carried them into his hut, and killed and ate them. Because they had been so cruel to her, the old woman did nothing to save them from their fate.

Why Some Souls Are White and Others Black