Some bodies of waters in Africa are polluted because of flip flops.

One of the largest marine pollutants along Africa's' East coast are cheap plastic foam flip flops but flip flops found littered on beaches and in waterways of Kenya are made into works of African art.

Flip flops are one of the largest marine pollutants in the Indian Ocean and her beaches. Tons of broken and discarded flip flops wash up on East African coast each year. These flip flops were dumped in cities and villages and are carried away by sewage systems, rivers and other waterways into Kenyan coastlines every year.

The union of ocean currents at the tip of the Lamu Archipelago drags thousands of flip flops washed away from beaches around the world onto the sea turtle nesting grounds.

With driftwood and flip flops littering the beaches, female sea turtles struggle to reach nesting sites and hatchlings, already threatened by a variety of predators that lie between the nest site and the water's edge, often fail to reach the safety of the ocean when faced with piles of debris.

"Over three billion people can only afford flip flops," says Erin Smith of Ocean Sole, "They hang on to them, they fix them, they duct tape them, mend them and then usually discard them."

"We are actually receivers of pretty much the world's marine pollution, an immense amount of the pollution that appears on East Africa beaches come from thrown away flip flops from Asia, India and China.” 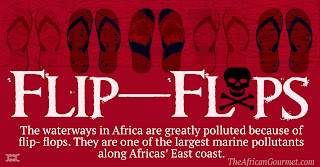 Ocean Sole has a team of African artisans in Nairobi Kenya to design sculptures from discarded flip flops into crafty works of art and just as important, a source of income. The African artisans clean the rubber sandals and sort them according to their color. Next, they cut, mold and sand them as they turn the old flip-flops into their eye-catching creations.

Importing flip flops from recycling crews from Kenya including Kibera (Key-bear-a), Kenya’s Largest Slum, broken flip flops are made into animal creations such as the famous 18-foot life-sized giraffe.

Artists convert the flip flops into sculptures, jewelry, key rings and other small gifts to sell in local tourist markets and to export around the world. These celebrated upcycled flip flop creations have even made their way into the hands of Pope Francis in 2015.

According to Ocean Sole, "Thousands and thousands of flip flops are washed up onto the East African coast creating an environmental disaster.

Discarded flip flops not only spoil the natural beauty of African beaches and oceans, the rubber soles are swallowed and suffocated on by fish and other marine life. Flip flops also obstruct turtle hatchlings from reaching the sea and are a man-made menace to Africa’s fragile ecosystems."