Africa’s deadly Mediterranean Sea suffers higher fatal African refugee and migrant shipwrecks than any other route in the world. 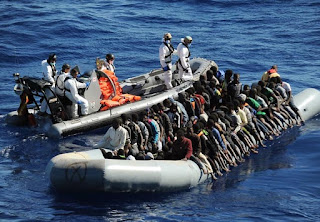 Thousands of African refugees and migrants have died as a result of drowning attempting to reach Europe via the Mediterranean sea from Africa's shoreline often on overcrowded boats that capsize or sink. This reached a peak in 2016, when more than 4,500 migrants died. Off the coast of Libya in 2019 it is estimated that 900 people lost their lives attempting to make the journey across the Mediterranean Sea.

In August 2019, the humanitarian charity operating the Open Arms ship, saving the lives of refugees and migrants at risk in the Mediterranean Sea faced a 1 million dollar fine from Italy. The Open Arms had for days been stuck off the Italian island of Lampedusa as Salvini refused to let it dock. "The Open Arms doesn't have a permit to rescue," Spain's Deputy Prime Minister Carmen Calvo told Spanish radio.

It was reportedly banned from heading to the seas off Libya, where people attempt the perilous journey to Europe on rickety boats, but went anyway. Returning with 164 migrants on board, the ship wanted to dock in Lampedusa, the largest island of the Italian Pelagie Islands in the Mediterranean Sea and the nearest safe port.

But Matteo Salvini, an Italian Lega Nord party politician who served as Deputy Prime Minister of Italy and Minister of the Interior from June 1, 2018 to September 5, 2019 banned all Non-Governmental Organization rescue boats from entering Italian ports and prevented The Open Arms from docking on Italian land. The ship remained at sea for three weeks.

The ship was carrying 164 refugees and migrants mainly from African countries, some people were evacuated for mental health reasons due to post traumatic stress and bodily medical care also all unaccompanied children were allowed on the Italian shore however 83 people who remained on board were not allowed on shore but had to seek asylum in other European countries.

Also, Salvini refused a landing berth in July 2019 to an Italian coastguard vessel that had picked up 145 migrants rescued by two other boats. The Gregoretti was stuck at sea for days until a judge approved its landing in Augusta, Sicily.

Another Italian rescue ship carrying 141 people was refused entry into Italy for days until Albania, Ireland and Italy’s Catholic Church agreed to take responsibility for the passengers. In July 2020, the Ex-minister Matteo Salvini faces kidnapping charges for preventing docking of migrant rescue ships by a special tribunal.

There are 35 African small and large cities bordering the Mediterranean Sea.

After the dangerous journey at sea, Africans arrival to The European Union Member States.

The main African country comprising new citizens in the EU-27 is Morocco with 67,000 new citizens, that is 10% of all citizenship's granted.

Malta is situated in the center of the Mediterranean Sea north of Libya and south of Sicily. The island is 17 miles long and 9 miles wide, slightly less than twice the size of Washington, DC in the USA with a population of around 498,000 people. Most of the population lives on the eastern half of Malta, the largest of the three inhabited islands, Gozo and Comino being the remaining two.

Luxembourg is located in Western Europe between France and Germany and is one of the six founding member countries of the EU. The total population is around 628,000 people living on land that is slightly smaller than Rhode Island and about half the size of Delaware USA.

Within the EU-27 and around the world, there is misunderstanding over the use of terms to describe the difficulty of those making the most dangerous journey across the burial ground of the Mediterranean Sea. The difference between a migrant, asylum seeker, immigrant and a refugee is more than just semantics, it is vital.

The difference between a migrant, asylum seeker, immigrant and a refugee is, a migrant is a person who makes a conscious choice to leave their country to seek a better life, education or unite with family elsewhere and can choose to stay or return home.

An immigrant is seeking permanent residency while a refugee are people fleeing armed conflicts or persecution while an asylum seeker is a person who claims to be a refugee but whose claim hasn’t been evaluated. The difference between a migrant, asylum seeker, immigrant and a refugee is a crucial distinction for EU-27 Member Countries receiving new arrivals.