How to Cut a Mango | African Gourmet Basics

A fresh mango has one large, long, flat seed in the center of the fruit. Once you learn how to work around the seed, cutting a fresh mango is simple. 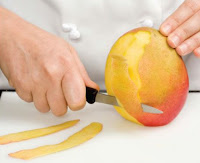 Good rule to follow when choosing the perfect mango to cut is do not focus on the color of the mango since it is not the best indicator of ripeness. Squeeze the mango gently. A ripe mango will give slightly.

How to cut fresh mangos 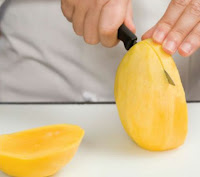 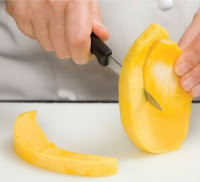 1.   Always judge when a mango is ripe by feel.

2.   Wash the mango before cutting with warm water

3.   After cutting thin slice from 1 end of mango, rest mango on trimmed bottom and cut off skin in thin strips, top to bottom.

4.   Cut down along each side of flat pit to remove flesh.

5.   Trim any remaining flesh off sides of pit. Once fruit is peeled and sliced, it can be chopped as desired.


Mix all ingredients in a bowl and store in an airtight container in the refrigerator at least 2 hours before serving. Use Spicy Curry Mango Coconut Relish in place of relish, mustard, ketchup and salsa.