Many of the worst serial killers recorded in history are women.

Death is a woman living in Uganda Africa, The Programmer Credonia Mwerinde the worst mass religious murder in the world. 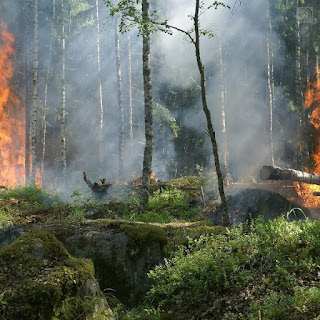 Death is a female from Uganda and her name is Credonia Mwerinde believed to be the worst mass religious murder in the world. Many of the worst serial killers recorded in history are women. Women who society tends to believe can’t engage in such dreadful activities as they are thought of as caregivers and kind.

Credonia Mwerinde was believed to organize the death of at least 924 followers in the cult in a fire and mass killing that engulfed the secluded mountain church at Kanungu, Uganda. The mass murder is the largest religious sect mass murder in the world, the second largest is Jim Jones who led 912 followers to their deaths in Guyana in 1978.

Credonia Mwerinde was born in 1952 in Uganda was the leader of Ugandan Marianist cult of the Movement for the Restoration of the Ten Commandments located in Kunungu Uganda. While Mwerinde was officially only one of the cult's "12 Apostles,'' inside the sect she was known as "The Programmer'' and her power was unchallenged, says Therese Kibwetere, Joseph Kibwetere's estranged wife. "Whenever anything was to be done, it was Credonia,'' she said.

Predicting that the world would end with 1999, the cult crusaded for a return to a life according to the Ten Commandments, saying they were the only path to salvation. Through a 163-page manifesto, ''A Timely Message From Heaven: The End of the Present Times.'' cult leaders said they had received messages from the Virgin Mary, the manifesto contains sinister prophecies of famines and wars, of rivers turning to blood and of food turning to poison. The cult maintained fragile associations with Roman Catholicism, which is a strong force in Uganda.

The cult's ranks swelled living in five compounds across Uganda with estimates of its peak membership of 4,000 people. To join, people were expected to sell off their possessions and turn over the considerable sums of money, say many relatives of those who perished at Kanungu. Kibwetere, Mwerinde and other sect leaders had predicted that the world would end last Dec. 31, 2000. When that did not happen, authorities believe members demanded the return of possessions they had surrendered to join the sect, rebelled and were slaughtered but this theory was believed false.

Credonia Mwerinde once led cult followers on an invasion of a relative’s land who had refused to join the cult; the cult burned down his banana plantation. All three of her brothers died off, one by one until she was the sole owner of the land that eventually became the cult's headquarters.


Followers had sworn absolute poverty, chastity, and obedience. The cult included defrocked former Catholic clergy. Catholic icons were prominent at the group's premises and a number of defrocked Catholic priests and nuns dominated its leadership. The cult's followers were drawn from south and central Uganda and from neighboring Rwanda.

She was reported to have killed hundreds of her followers early Monday morning on March 17, 2000, she locked her followers in a chapel, which faced Rugyeyo Mountain, all doors and windows were secured so that nobody could escape and then the building was set afire.

The remains of 530 people, mostly their bones and in some cases only their ashes lay massed at one end of the chapel. Virtually no one could be positively identified, and by Monday night, they had all been buried together in a grave. The fire was just the beginning; police discovered hundreds of bodies of the cult’s members in subsequent days.

Some of the victims appeared to have been stabbed or were strangled. Hundreds were children. Press reports put the police estimates of the overall death toll at 924, surpassing the 914 dead in Jamestown, Guyana, in the November 1978 mass suicide by members of the Peoples Temple. The body count was confirmed in April 2000 according to AP.

Officials discovered the bodies of six hefty men partly dissolved in sulfuric acid, the executioners, police theorized, who had carried out the massacres on Credonia Mwerinde orders. Five men had been poisoned to death and one killed by a blow to the head.

"It would have been the perfect murder," said investigator Eric Naigambi. Credonia, disappeared after the incident alongside Joseph Kibwetere, an excommunicated Roman Catholic Priest and yet to be found. The Ugandan government has declared Sunday, April 2 a national interdenominational prayer service day in memory of the hundreds of people who perished in the Kanungu mass murder.