Who Was Steve Biko and the Black Consciousness Movement

The death of Steve Bikoin police detention in 1977 led to his being hailed as a martyr of the anti-Apartheid struggle. 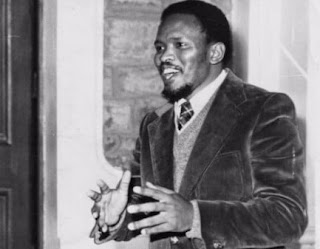 From an early age, Steve Biko showed an interest in anti-Apartheid politics. After being expelled from his first school, Lovedale, in the Eastern Cape for 'anti-establishment' behavior, he was transferred to a Roman Catholic boarding school in Natal. From there he enrolled as a student at the University of Natal Medical School (in the university's Black Section). Whilst at medical school Biko became involved with the National Union of South African Students or NUSAS. But the union was dominated by white liberals and failed to represent the needs of black students, so Biko resigned in 1969 and founded the South African Students' Organization or SASO. SASO was involved in providing legal aid and medical clinics, as well as helping to develop cottage industries for disadvantaged black communities.

In 1972 Biko was one of the founders of the Black Peoples Convention or BPC working on social up-liftment projects around Durban. The BPC effectively brought together roughly 70 different black consciousness groups and associations, such as the South African Student's Movement or SASM, which played a significant role in the 1976 uprisings, the National Association of Youth Organisations, and the Black Workers Project which supported black workers whose unions were not recognized under the Apartheid regime. Biko was elected as the first president of the BPC and was promptly expelled from medical school. He started working full time for the Black Community Programme or BCP in Durban which he also helped found. 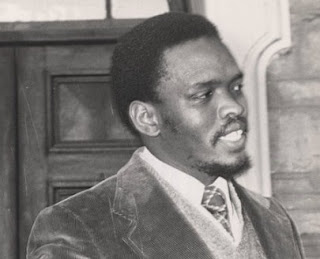 In 1973 the Apartheid government banned Steve Biko. Under the ban, Biko was restricted to his home town of Kings William's Town in the Eastern Cape he could no longer support the BCP in Durban, but was able to continue working for the BPC he helped set up the Zimele Trust Fund which assisted political prisoners and their families. Biko was elected Honorary President of the BPC in January 1977.

Biko was detained and interrogated four times between August 1975 and September 1977 under Apartheid era anti-terrorism legislation. On 21 August 1977 Biko was detained by the Eastern Cape security police and held in Port Elizabeth. From the Walmer police cells, he was taken for interrogation at the security police headquarters. On 7 September "Biko sustained a head injury during interrogation, after which he acted strangely and was uncooperative. The doctors who examined him naked, lying on a mat and manacled to a metal grille initially disregarded overt signs of neurological injury."

By September 11th Biko had slipped into a continual, semi-conscious state and the police physician recommended a transfer to hospital. Biko was, however, transported 1,200 km to Pretoria – a 12-hour journey which he made lying naked in the back of a Land Rover. A few hours later, on 12 September, alone and still naked, lying on the floor of a cell in the Pretoria Central Prison, Biko died from brain damage.

The South African Minister of Justice, James Kruger initially suggested Biko had died of a hunger strike and said that his death left him cold. The hunger strike story was dropped after local and international media pressure, especially from Donald Woods, the editor of the East London Daily Dispatch. It was revealed in the inquest that Biko had died of brain damage, but the magistrate failed to find anyone responsible, ruling that Biko had died as a result of injuries sustained during a scuffle with security police whilst in detention.

The brutal circumstances of Biko's death caused a worldwide outcry and he became a martyr and symbol of black resistance to the oppressive Apartheid regime. As a result, the South African government banned a number of individuals including Donald Woods and organizations, especially those Black Consciousness groups closely associated with Biko. The United Nations Security Council responded by finally imposing an arms embargo against South Africa. Biko's family sued the state for damages in 1979 and settled out of court for R65,000 then equivalent to $25,000 US.

The three doctors connected with Biko's case were initially exonerated by the South African Medical Disciplinary Committee. It was not until a second inquiry in 1985, eight years after Biko's death, that any action was taken against them. The police officers responsible for Biko's death applied for amnesty during the Truth and Reconciliation Commission hearings which sat in Port Elizabeth in 1997. The Biko family did not ask the Commission to make a finding on his death. 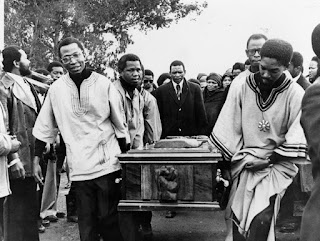 "The Commission finds that the death in detention of Mr. Stephen Bantu Biko on September 12, 1977, was a gross human rights violation. Magistrate Marthinus Prins found that the members of the SAP were not implicated in his death.

The magistrate's finding contributed to the creation of a culture of impunity in the SAP. Despite the inquest finding no person responsible for his death, the Commission finds that, in view of the fact that Biko died in the custody of law enforcement officials, the probabilities are that he died as a result of injuries sustained during his detention."