Human sacrifice has been practiced in various African cultures throughout history. 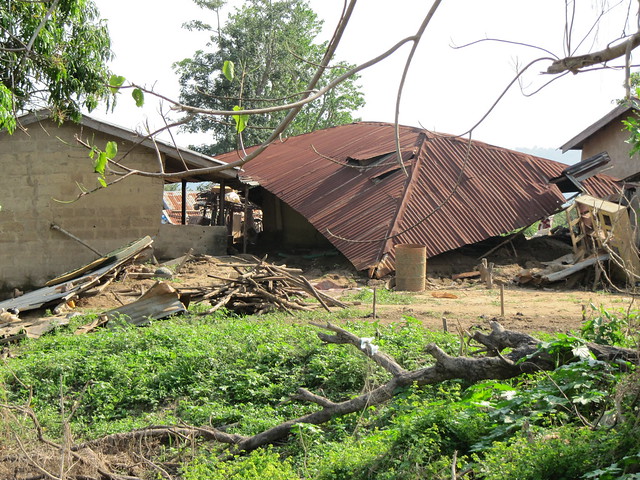 Southern Nigeria’s Igbo ethnic group inhabits the remote villages of Umuhu and Ubahu-Ezike in Okija where police say they are investigating alleged ritual murders, while the shrine’s priests insist that their Gods killed the people. The question remains if Okija Village ritual murders are the Gods of the evil forests punishment or religious greed. 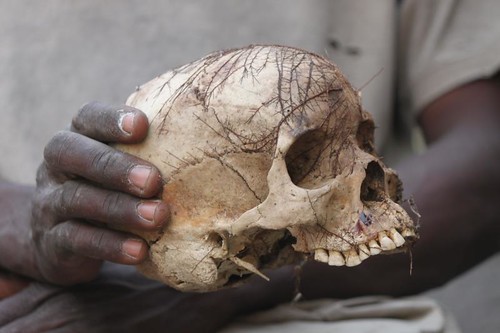 In many villages throughout rural Africa, those who are not practitioners of a major world religion such as Christianity, Catholicism, or Islam, almost all have their own Gods.

The oldest concept of the place where Gods exist, is in the forest. Southern Nigeria’s Igbo ethnic group inhabits the remote villages of Umuhu and Ubahu-Ezike in Okija where police say they are investigating alleged human sacrifice ritual murders, while the shrine’s priests insist that their Gods killed the people.

The impenetrable depth of the great forests of Africa is the heartland of the spirits and of all magical beings. Southern Nigeria’s Igbo ethnic group inhabits the remote villages of Umuhu and Ubahu-Ezike in Okija amongst a great thicket of trees.

Thick forests and poor roads from the bustling commercial cities isolate Okija village, however the village was front-page news in Nigeria on August 3, 2004 when police descended on its shrines on alleged human sacrifices.

Police informant, Chukwumezie Obed Igwe whose complaint led to the raid was not believed at first however, when the police arrived at the Ogwugwu Akpu, Ogwugwu Idigo and Ogwugwu Isiula shrines, decomposing corpses and skeletons in coffins and on the ground littered the two sides of the road. Leading to the stronghold of the shrine, trees in the entire forests were wrapped in white and red cloths.

The police say they are investigating alleged human sacrifice ritual murders, while the shrine’s priests insist that ancient gods killed the people in the woods. “We don’t kill. The God kills. We settle disputes between parties. But the shrine will kill the guilty if he swears falsely,” insisted the chief priest at one of the shrines, the elderly Orjiewulu Okolie.

The God’s chief priest role was to listen to complaints from people who come to report how they were oppressed and dispossessed of their land and other property by the wealthy.

The process of the oath taking, priest Okolie said, begins with the complaint which is followed by a summon to the oppressor. Upon his receipt of the invitation, he is expected to come and tell his own side of the story for the priests to hear in his house which serves as his court.

When both parties consistently insist on their version as the truth of the matter without any conceding, the oath is administered as the last resort after they had been reminded of the God’s killing powers. According to the Vanguard, the true story of the shine is steeped in greed, not worshiping God or deities. Ogwugwu priests by virtue of their place of birth, decided to exploit the shrines, and turned them into money making schemes using the Ogwugwu God.

They introduced a register of those that visit Ogwugwu 30 shrines and thereafter, began to charge money to those who use the shrines.

As the Ogwugwu village shines became more popular, the priests engaged the services of commercial motorcycle operators. The Okada riders used the famous Okija junction, a landmark stopping point for local travelers as their base of operation.  The Okada riders would volunteer to take anybody visiting the shrine however, it was the rider's job to convince the visitor their priest was the most powerful.

That was why the commercial motorcycle operators would do anything possible to ensure that they were the ones to carry first time visitors to a priest of the Ogwugwu God shrine as he is also assured of a commission from the amount paid by the visitor.

It was not clear at what point the operators of the shrine began to demand for the corpses of those allegedly killed by the Ogwugwu God.

The priests of the Ogwugwu God would demand the corpse the same day it was buried and the body would be exhumed and taken to the Ogwugwu forest and kept there.

The corpse would be shown to those who appear before the Ogwugwu God after they were summoned and this further instills fear with the result that they would do the bidding of the priests to stay alive.

With the intimidation scheme soaring in popularity, Ogwugwu Akpu, priests suddenly had their lifestyles changed as they began to acquire expensive cars and started building mansions in the village. Over 30 priests of the different shrines of Ogwugwu God were arrested and would be prosecuted for the so-called ritual killings. Nigeria's Inspector General of Police,

Tafa Balogun stated, “Sections 207 and 208 of the criminal code are against the possession of dead bodies and section 34 of the Constitution of the Federal Republic of Nigeria is against being members of secret cults.”