Green bananas are best eaten cooked.
Easy African recipe of grilled green bananas is a simple side dish usually accompanied by stew or porridge.
You can also substitute green or yellow plantains in this classic African recipe. 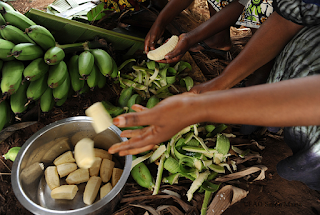 Peel the bananas and cut in half lengthwise place on top of foil. Brush on palm oil and evenly add spices. Grill bananas wrapped in foil over very low coals for about 5 minutes on each side.


Côte d’Ivoire is the largest exporter in the Western African region of bananas followed by Cameroon, Ethiopia and Ghana. More than 70 million people in 15 countries in Sub-Saharan Africa depend on bananas for their livelihood and food supply.