Two Bulls Can't Stay in the Same Kraal tells the folklore story from Ghana Africa of sibling rivalry and a hard-headed younger brother.

Against the African folklife background many microcultures social identity becomes expressed in folklore history often compressed into one African culture and heritage.

The narrative of Africa's folklore traditions is tied into the magnificent historical emergence of many nations. 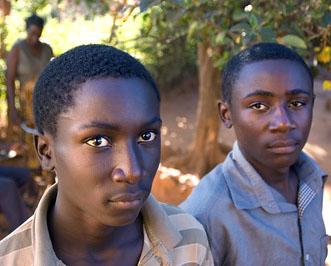 However, folklore from Africa has been central to folklife magnifying views of culture, views that mattered so much to a continent struggling with rapid changes twisted by large-scale wars, immigration, industrialization, and urbanization.

The African story is one of continual material and social progress, building families through cultural consensus with peoples accepting and embracing an African identity.

African folklore is concerned with the legends, customs, beliefs of the people which have least been altered by education, which have shared least in progress.

Two Bulls Can't Stay in the Same Kraal tells the folklore from Africa of the fact of African folklife and a hard-headed younger brother.

In Ghana, in a town named Sekondi-Takoradi there lived two brothers who could not agree with one another, the younger continually asserting that he knew more than his brother did, thus enraging his elder.

At last, the younger brother said he could stand it no longer, and threatened to leave his town.

Therefore, he and his wife left the town and wandered far away, until at last they entered a wood and came to a little river of very clear water.

“Let us drink, “he said, “and sit down here, as there does not seem to be a path leading from the river on the other side.”

Therefore, they drank and rested. Then he got up and waded down the stream some way, and found a pathway on the other side of the river. He called his wife, and they proceeded on their way.

Soon they heard voices, and wondered what kind of people could have built in such a place.

“Let us go back, “said the wife; " how do you know that these people will not harm us?”

“No, I will not go back; so let us enter the town at once.” They saw only two or three huts .Now these homes were inhabited by a man and his wife, who had left his town on account of certain palavers that had been constantly pushed against him .

“And where do you come from?” said he, as the stranger and his wife entered his clearing.

The younger brother told him how it was that he had left his town and wandered there, and added that he would like to live there with him.

“No, certainly not; I am a good man, the others treated me badly.”

“Well, there’s a shack for you; stay there.”

They did nothing for four days; but on the fifth day the man proposed that they should take their women with their hoes to a certain place he knew of, and get them to dig a large hole, which they would cover over with dried sticks and leaves, so as to form a trap for the many wild animals that passed that way.

“Now, that we may not quarrel over the game we catch, tell me: which will you have, the males or the females?”

The younger brother said he would take the males. Agreed! Then I will take the females. ”
Agreed! ”

They went back to their towns, and slept soundly that night. The next morning very early, they went to see their trap. They had caught an ox.

‘It’s yours, “said the owner of the town, “take it.” The next day an antelope, the next day a goat, and the next a hog, each day a bird of some kind, until the younger brother had so much meat that he did not know what to do with it.

However, he gave the owner of the town none of it. He sent his wife out into the woods to gather sticks to smoke the meat, and so preserve it.

Towards night, he became anxious about her, as she had not returned. He went to the owner of the town and told him about it. However, he could not account for her absence.

The younger brother roamed about the whole night, crying and moaning at the loss of his wife. Early he awoke the owner of the town and asked him to go with him to look for her.

“Yes. First let us go and see the trap, for I have dreamt that luck has changed, and that to - day we shall catch a female. "

They went, and soon discovered the female in the trap. It was the young man’s wife. Overjoyed at finding her the young man wanted to jump into the hole to help her out. However, the man reminded him of his agreement, and how he had given him none of the meat he had caught.

« No, take all the meat you like, but my wife is a human being, surely you will not kill and eat her?”

“She is mine by agreement, I can do as I like with her.” Thus, they went on wrangling the day through.

Now the elder brother had gone out hunting and had chanced to come into the wood not far from where the trap was. He heard voices, and so crept cautiously up in that direction. He recognized his brother’s voice and ran to him.

The younger brother was overjoyed to see him and welcomed him boisterously.

The elder brother met him coldly. When the owner of the town knew who the stranger was, he laid the whole matter before him, and asked him to say whether the female in the trap was his or not.

The elder heard all, and answered that the female in the trap was certainly his and that he had better go in and kill her. The younger brother tried to restrain him; but the man flung him aside and jumped into the trap.

“Fool, “said the elder to the younger, when he saw him trying to stop the man from entering the pit; “can you not yet trust your brother’s superior wisdom?

See, now, that male in your trap; he is yours by agreement, even as your wife is his. Spare his life, and perhaps he will give you back your wife.”

The man saw how he had been fooled, and gave the woman up. The two brothers and the wife then returned to their town.

African Proverbs about not listening to your older sibling: