In Africa, half the population of the continent are without legal identity.

Legal identification is a means of identifying or authenticating the identity of an individual and the recognition of a person’s existence before the law. In many African countries, a birth certificate is necessary to attend primary school and to graduate, and a national ID card is necessary to enroll in university and to vote in elections. Throughout the continent of Africa, half of the estimated 1.2 billion people are without identity. 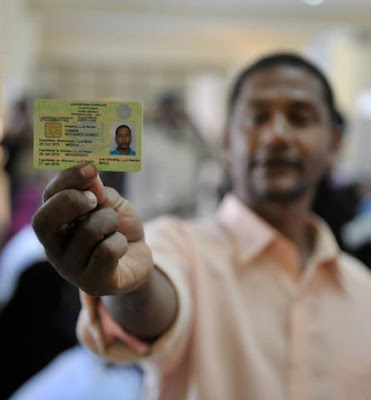 Digital identity can be created from information found on a government-issued legal identification such as national identity cards and can be used to accurately recognize an individual. However, the barriers are great in Africa.

The absence of legal identity arising from a weak government can be particularly acute in countries that have experienced violent conflict. It is extremely difficult to construct a measure of legal identity that represents the different legal, political and social realities of over 54 African countries in the system due to stateless person, internally displaced persons and refugees.

The international legal definition of a stateless person is someone who is not considered as a national by any State under the operation of its law. Africa has just under 1 million stateless persons and 18 million displaced persons. Internally displaced persons (IDPs) are have not crossed a border in their own country to find safety for themselves and their family, they are on the run at home.

With 5 million internally displaced, Sudan has the largest reported IDP population, victims of the conflict and the instability in Southern Sudan. According to the United Nations, developing countries, mostly in Africa, are taking in a disproportionate number of refugees currently 80% of the world’s refugee population.

The Untied States of America has a social security number system which is a form of an id. The passage of the Social Security Act in 1935 was to devise a method for uniquely identifying the earnings records for the millions of persons.

Your divers licence is another form of digital id, as in Florida state driver's license number format is 13 digits, consisting of one alphabetic character and 12 numeric characters. Every driver has a unique number based on last name, first and middle initial, birth date and sex.

Africa has no universal system of issuing id efficiently and accessing proof of legal identity is a complex bureaucratic process. The World Bank estimates that nearly half the population of the continent are without a legal identity due to a poor civil registration and vital statistics system on the continent.

Throughout the continent of Africa, half of the estimated 1.216 billion people are without identity. Most of them will not be issued birth certificates. In the USA, a birth certificate is a document issued by a government that records the birth of a child for vital statistics and census purposes, birth certificates serve as proof of an individual’s age, citizenship status, and identity.

A national ID card is necessary to be admitted to the hospital, to enroll in university, to vote, to open a bank or mobile money account, to get married, get a passport, and attain many other basic services. In many countries, people without legal documentation are unable to work in the formal economy, and are more likely instead to earn livelihoods informally, without legal protections and often at a lower wage.

People need photo IDs to do just about everything, and without id people feel invisible contributing to a loop that can help keep individuals trapped in poverty.. For most American people, replacing a lost driver’s license or other ID is an inconvenience but not an ordeal. For Africans IDs is a lifeline a key to unlocking services and opportunities, from voting to housing to jobs to education.