Reading and collecting three famous short African folklore stories, Foolish Tongue, Why Frogs Croak and Why the Sky is Curved.


In Africa, in the earliest times before there were pictures or written words there was the African folktale. For centuries, stories were passed down by word of mouth from one generation to the next. As Africans traveled across the African continent, they took their stories with them.

Every community had a storyteller who sat around the fire at night spinning yarns of magical tales and legends. African folktales reached into the heart of the people and grew into the lifeblood of the African community.

African folklore storytelling has long been accepted as a form of teaching to be defined as a series of events told in such a way that it moves the emotions and the intellect. African folklore storytelling is a spiritual legacy passed down from one generation to another. It is as old as Africa herself with a deep appreciation for antiquity expressed in artistic form.

Folklore storytelling is the most ancient art form of the African Community. Just as someone expresses their ideas and the form of music, painting, dance and sculpture folklore takes the ideas of an ancient story and creates with words a picture that enchants the listener with a rich auditory environment. 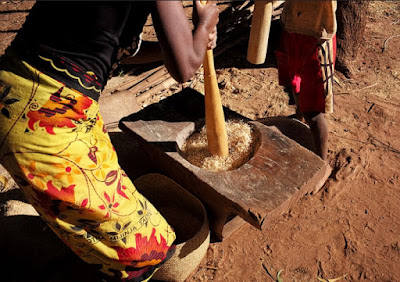 Here are three famous short African folklore stories, Foolish Tongue, Why Frogs Croak and Why the Sky is Curved.


The chief of a village once asked, “Who are more in number in our village, the women or the men?”

Koa, the village jester answered without hesitation, “Men are the minority, women the majority!”

Koas' wife turned to him puzzled and asked, “How do you know this?”

Koa laughed and said, “The reason why there are more women in our village dear wife is that men who listen to what women say are counted as women!”

As soon as he spoke the words, Koa knew he would soon have one foot in this world and one in the next for his wife answered, “It is your foolish tongue that will carry you to your grave husband!”.


The animals arrange a wrestling match between frog and elephant.

It is agreed that at the beginning of the match, at the signal each contestant will rush forward into the wrestling match and begin the contest.

However, the elephant comes so fast, that he stumbles and falls over on his back, frog jumps through elephant's legs, pins him and wins the match.

All Frog's relatives began to croak, and to this day, they crock to each other celebrating the victory over the elephant.

Why the Sky is Curved East African Folklore Short Story

Many, many years ago, when people were innocent, as soon as they died, their souls went directly to heaven.

In a short time, heaven was crowded with souls, because nearly everyone went there.

One day, while God was sitting on his throne, he felt it move by someone.

On looking up, he saw that the souls were pushing towards him because the sky was about to fall. At once he summoned five angels, and said to them, “Go at once to the earth, and hold up the sky with your heads until I can have it repaired.”

Then God called together all his carpenters, and said to them, “Repair the heavens as soon as possible.”

The work was done; but it happened that the tallest angel was standing in the center of the group; and so, ever since, the sky has been curved.


More short folklore stories from Africa to make you fall in love with myths and legends again from the motherland.