Why African kente cloth is popular

Kente cloth pronounced Ken-Tay is the most famous African textile design. Kente a Ghanaian traditional fabric that is worn for major celebrations.


Kente cloth is interwoven with Africa and the African diaspora, and the entire world.

Why African kente cloth is popular

Africa, particularly in the areas of dance, music and the fine arts has influenced cultures around the world for two millennia. African people are creative having a long history of unique cultural elegance valued around the world over. The fact is making and trading of African cloth have been vital elements in African culture. The first colorful kente cloth was worn by Otumfuo Nana Prempeh I, a former Ashanti king. Through cloth, we can understand not only Africa’s history but also its engagement with other parts of the world. Textiles can be used to address global issues and to express individual traditions of Africa. African textiles unspoken language often provides a way of suggesting thoughts and feelings that may not or cannot be expressed in other ways, and these cloths regularly move between the kingdoms of the earthly and the revered. 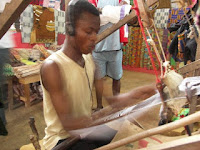 Kente cloth is the most recognizable of all African textiles. Kente cloth originated with the Ashanti people of Ghana dating back 375 years in the village of Bonwire. Bonwire is a kente clothing weaving village in Ejisu-Juaben Municipal district, a district of Ashanti. To this day, Bonwire is still the most famous center for kente cloth weaving. Traditional Kente Cloth was black and white however the colors of black, red, yellow and green symbolize: Black represents Africa, Red represents the blood of ancestors, Yellow represents a wealth of gold and Green represents the land.

According to legend, Kurugu and Ameyaw, two brothers from the village, went hunting one afternoon and came across a spider spinning a web. They were amazed by the beauty of the web and thought that they could create something like it. Upon returning home, they made the first cloth out of black and white fibers from a raffia tree. A second legend of the origins of kente cloth told by Bonwire villagers is the story of a man named Ota Karaban and friend, Kwaku from Bonwire had their weaving lessons from a spider that was weaving its web. They tried to do the same by weaving a beautiful raffia fabric. 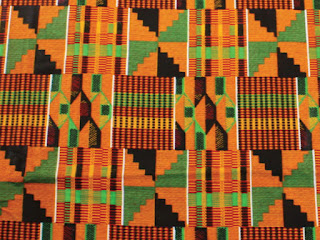