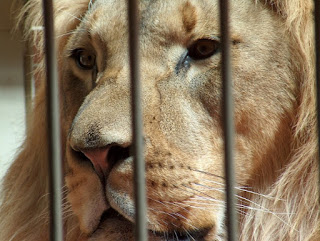 The facts on canned lion hunting are lions born and bred in cages. The hunting of lions in fenced areas is called canned hunting where a fully-grown, captive bred lion is taken from its pen to an enclosed area where it tracked for hours before being shot dead and it is all completely legal.


Facts About Animals of Africa


Lions born in bred in a cage

According to Wildlife Extra, tourist hunters kill around 105,000 animals per year, including around 640 elephants, 3,800 buffalo, 600 lions, and 800 leopards.
The great majority of lion populations in Africa have declined. Every single day in South Africa, around three caged bred lions are being killed in canned hunts while hundreds more are slaughtered annually for the lion bone trade.

Captive lion breeders argue it is better that lion trophy hunter’s shoot a captive-bred lion than a wild lion. Wild populations of lions have declined by 80% in 20 years, so the rise of lion farms and canned hunting has not protected wild lions.

What is Canned Lion Hunting


South Africa has a strong hunting tradition. There are around 200 such farms and ranches legally breeding big cats in South Africa for canned hunting.
A canned hunt is where animals have been raised on farms or game reserves until they are mature enough to be killed. Lions are hunted in a confined area increasing the chances of the hunter attaining a kill.There are now more lions held in captivity, upwards of 5,000 in Africa than live wild, about 2,000.

Hunting of Animals in Fenced in Farms Captive lion breeders argue it is better that lion trophy hunter’s shoot a captive-bred lion than a wild lion. In the Free State province of South Africa, there are up to 8,000 captive lions spread across 200 farms and ranches, according to the South African Predator Association. Farms and ranches breed lions eventually to be killed by trophy hunters mainly from North America and Europe.
One private hunting farm is located in Alldays, notorious for what is known as driven hunts during which hunter’s fire at animals from the back of a truck. Alldays is a small town in the Limpopo province of South Africa that serves a large area of private game and hunting farms and the surrounding villages of Vivo and Dendron serve an extensive area of private game and hunting farms.

The documentary Blood Lions exposes South Africa’s controversial canned lion hunting industry. Some African countries such as Botswana, where all trophy hunting was stopped in 2013 because of the government’s concerns over lion population declines are honoring the life of the iconic King of the jungle. Australia became the first country, in February 2015, to ban imports of lion trophies, followed by France in November 2015.