Learn about a face only a mother could love African wild pigs also known as warthogs. 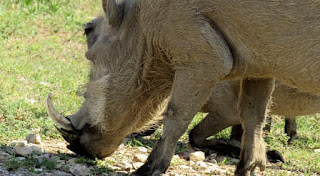 7.         African wild pig are omnivorous eating both plants and meat.

8.         The African wild pig will use its snout and tusks to dig for bulbs, tubers, and roots during the dry season.

9.         During the wet season, they may eat earthworms and other small invertebrates. 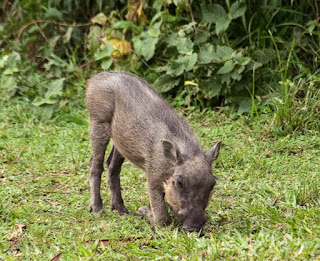 11.      African wild pigs have no fur or fat only sparsely grouped bristles.

12.      The African wild pig lacks both protection from the sun and insulation from cold.

13.      African wild pig live in family groups composed of a female and her young. Sometimes, two families, often of related females, will join together.

15.      Before giving birth to a new litter, the female African wild pig

will chase away the litter she has been raising and goes into isolation.

16.      These abandoned juveniles may join up with another solitary female for a short time before they go out on their own. 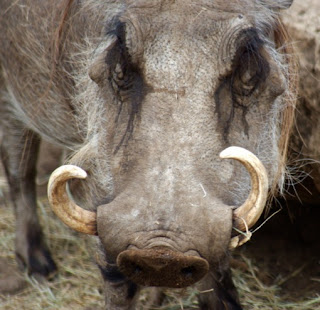 17.      The female African wild pig suckles the new litter, and each piglet has its own teat, suckling exclusively from it. Even if a piglet dies, the others do not suckle from the available nipple.

18.      The African wild pig large tusks are two upper tusks emerge from the sides of the snout to form a semicircle; the lower tusks, at the base of the uppers, are worn to a sharp-cutting edge.

19.      Sparse bristles cover the African wild pig body, and longer bristles form a mane from the top of the head down the spine to the middle of the back.

20.      The African wild pig characteristically carries its tail upright when it runs, the tuft waving like a tiny flag. 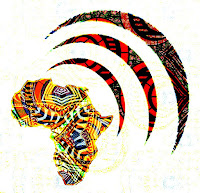