Kuli Kuli is made from roasted groundnuts ground into a rough paste mixed with sweet and savory spices deep-fried. 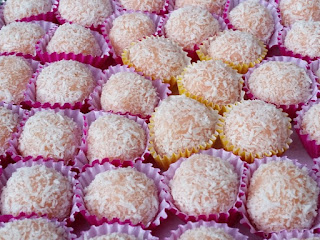 Directions
Grind nuts and spices in a food processor adding enough oil to make a rough paste. Shape the peanut paste into balls. Roll Kuli Kuli in coconut flakes or chocolate chips for an African Fusion twist. Serve as a snack.

Did you know, Groundnuts and peanuts are used interchangeably but are not the same. The name groundnut generally refers to the peanut even though the Bambara variety was cultivated in West Africa hundreds of years before the introduction of the peanut. Bambara groundnuts taste like chickpeas with a very mild flavor.