Bitter Kola Nuts Good for What Ails You 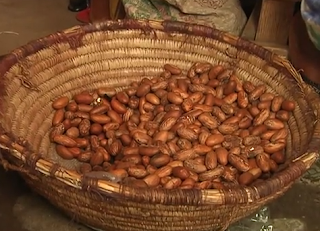 Bitter kola is a type of nut mostly found in tropical zones in the forests throughout West and Central Africa.

Bitter cola nuts come from the Garcinia kola tree, traditionally these nuts were used as medicine and nowadays the nuts of the tree is still used to treat many ailments. Bitter kola’s value as medication for weight loss, a sore throat, upset stomach, ulcers, and liver disorders is priceless medicinally and spiritually to West and Central African people.

Bitter kola energizer drink is very popular in Serra Leone and is used as a substitute for hops in brewing beer in some African countries. Bitter Kola is especially useful in preventing beer spoilage. Bitter kola is also known as a food that has the ability to ward off evil spirits. Chewing on the seeds of the bitter kola tree is rumored to have the same effect as a little blue pill treating sexual dysfunction.

In 2014 there were fake reports of bitter kola cured infectious diseases such as HIV-AIDS and the Ebola virus.  In central Nigeria, it was reported Ebola was cured after warm water mixed with salt and then eating bitter kola nuts were consumed by a woman. Bitter kola was thought to possess antiviral properties.

Bitter Kola is not to be confused with the caffeine-rich larger sized kola nut. The kola nut is culturally very important for West and Central tribes in traditional ceremonies, special events and welcoming visitors.

But deforestation and the conversion of forests for development and plantations has reduced the number of wild bitter cola trees. Demand for bitter kola is great in Nigeria and the ability to store the nuts and use them fresh or dried makes this an ideally versatile product to generate income for the family. 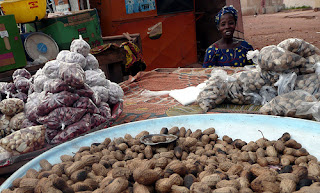