Love never loses its way home but is it cultural appropriation

West Africa Adinkra symbols represent ideas, proverbs, expressions, attitudes and behavior depicted in simply drawn figure. Adinkra symbols are well-known visual symbols that have a hidden meaning, deciphering Adinkra symbols is the same as reading a sentence as long as you know what is the symbols true meaning.

Akoma - secret meaning is “take heart” using patience, love and faithfulness.
Bi Nka Bi - secret meaning is "do not bite one another" symbol of peace and harmony. This symbol cautions against incitement and conflict. The image is based on two fish biting each other tails.


Why wearing Adinkra symbols are popular
Adinkra symbols are popular today as commercial logos and personal tattoos. These symbols have been worn in Africa to express personal theological or philosophical beliefs for centuries.
For starters, why Adinkra symbols are popular today is because the look is being reimagined in a way that speaks expressly to the young, appealing to millennials and Generation Z. For now, the trend retains its relevance, firmly rooted in its time on conscience and unconscious levels.
Tattoos of Adinkra symbols are tricky, can communicate trust or chaos, make you look smart or clueless, and come across as expensive or cheap. Today, social media is the driver, the Adinkra symbols resonating with those selfie addicts who like to flash their heavily tatted trophies on Instagram, their Adinkra symbol readily identifiable.
However, status is not the only draw. Younger people are adopting Adinkra symbols to signal their allegiance to a tribe or cause. Whether we want to admit it or not, we are influenced by, how others look and treat them accordingly.
Being aware of how perceptions influence reality, we should also remember that anyone can look the part, and it is time well spent to get to know the person beneath the Adinkra symbol persona. 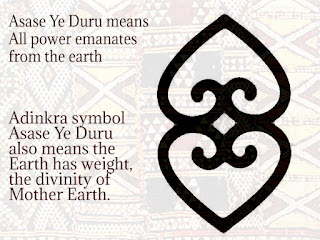 Is wearing Adinkra symbols cultural appropriation?
The Atlantic 2015 article by Jenni Avins and Quartz stated "Such borrowing is how we got treasures such as New York pizza and Japanese denim—not to mention how the West got democratic discourse, mathematics, and the calendar. Yet as wave upon wave of shrill accusations of cultural appropriation make their way through the Internet outrage cycle, the rhetoric ranges from earnest indignation to patronizing disrespect.
The article goes on further by saying: In the 21st century, cultural appropriation—like globalization—isn’t just inevitable; it’s potentially positive. We have to stop guarding cultures and subcultures in efforts to preserve them. It’s naïve, paternalistic, and counterproductive. Plus, it’s just not how culture or creativity work. The exchange of ideas, styles, and traditions is one of the tenets and joys of a modern, multicultural society.
“It’s not fair to ask any culture to freeze itself in time and live as though they were a museum diorama,” says Susan Scafidi, a lawyer and the author of Who Owns Culture? Appropriation and Authenticity in American Law. Cultural appropriation can sometimes be the savior of a cultural product that has faded away.”
Engage with other cultures on more than an aesthetic level “What would America be like if we loved black people as much as we love black culture?” asks Stenberg . Cherry-picking cultural elements, whether dance moves or print designs, without engaging with their creators or the cultures that gave rise to them not only creates the potential for misappropriation; it also misses an opportunity for art to perpetuate real, world-changing progress.
"The flowers of tomorrows are in the seeds of today." – African Proverb. Love binds us all together in perfect unity.


Getting to Know Africa