Intonga Stick Fighting.
The ancient African art of intonga or stick fighting has been practiced in rural South Africa for centuries and is long considered the best African sport.

Before the sports of futbol and football, there was the best of African sports the ancient African Xhosa game of intonga or stick fighting.

Just as with any other African sport there are rules to follow. In Intonga stick fighting there is a penalty for Kumhlaba Wamadoda or hitting in the “Land of Men” otherwise known as hitting below the belt. 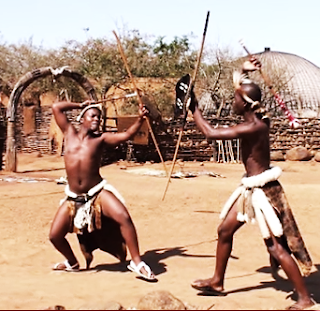 The ancient African art of intonga or stick fighting has been practiced in rural South Africa for centuries. In the past when a Xhosa boy went to initiation school, one of the skills he would learn and practice daily was stick fighting. A young Xhosa man who carried himself well as a stick fighter won respect wherever he went.

One of the first skills five-year-old Nelson Mandela learned as a herd boy was that of stick fighting. In his autobiography Long Walk to Freedom written in 1995, Mandela says, "I learned to stick-fight which is essential knowledge to any rural African boy – and became adept at its various techniques, parrying blows, feinting in one direction and striking in another, breaking away from an opponent with quick footwork."

The sport of stick fighting is one of South Africa’s oldest games developed hundreds of years ago in the rural parts of South Africa where it served as an important rite of passage in Xhosa culture. In today’s stick fighting games, competitors are armed with two sticks and protection for the head and hands.

People from the age of five upwards are eligible to participate in the game. When you hit the head you get six points. When you hit the neck you get four points, hitting the hip scores you five points, while a blow to the leg gains you six points. The player that can hit the other with the stick the most in this play-fighting, wins.

The referee will regulate the game by using a white stick to separate the players if there are illegal throws or strikes. Two fighters take up position inside the ring.

Each fighter carries two sticks, namely the attack and the defense stick. The referee blows a whistle to start the game and the fighters try to hit their opponent with their stick, while defending themselves with the defense stick.

Three judges judge the match and record points scored by each combatant. They also record deductible points where there are infringements of the rules. Points are awarded according to the number of blows that hit the opponent’s body. A bout consists of three rounds of one minute each.

Penalty points are deducted for every penalty committed. The following constitutes a penalty:

Did you know?
The most popular sports in South Africa are cricket, rugby and futbol (soccer).