What is even better than a tartlet recipe? A history lesson and recipe named after General General Hertzog. Hertzoggies are a delicious classic South African dessert of tartlets filled with apricot jam and coconut topped with meringue. 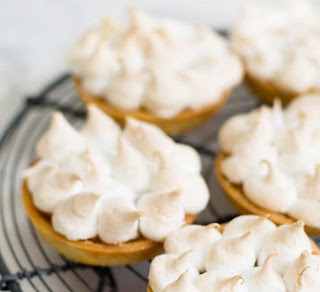 Hertzoggies are named after General Hertzog, who was South Africa's Prime Minister between 1924 and 1939.

Directions
For the dough, beat together butter and sugar until light and fluffy. Beat in egg yolk and vanilla. In a separate bowl, combine the flour, baking soda, and salt. Mix to combine. Add the dry ingredients to the wet and mix until well combined. Chill the dough for at least 15 minutes.

For the filling, beat together all ingredients until well combined.

To assemble tartlet, take a golf ball sized chunk of dough and roll it into a ball. Flatten the dough into a disc between your hands and place into prepared muffin pans. Place a teaspoonful of filling into the center of each.

For the meringue, in large bowl, beat egg whites and cream of tartar with electric mixer until foamy. Gradually add sugar, beating until mixture forms stiff peaks. Top each stuffed cookie with a dollop of meringue. Bake tartlet at 350 degrees for 10-12 minutes until the lightly golden.

How much do you know about General Hertzog?

Hertzog was a Boer general during the second Anglo-Boer War who became Prime Minister of the Union of South Africa from 1924 to 1939. Throughout his life, he encouraged the development of white Afrikaner culture. He is the only South African Prime Minister to have served under three British Monarchs of George V, Edward VIII, and George VI. In 1913, Hertzog led a secession of the Old Boer and anti-imperialist section from the South African Party.

Hertzog and his ministers did much to improve social and economic conditions for whites. Hertzog's Pact government enforced three key pieces of legislation: the Industrial Conciliation Act No 11 of 1924, the Minimum Wages Act No. 27 of 1925, and the Mines and Works Amendment Act no. 25 of 1926.

The Industrial Conciliation Act No 11 of 1924 created job reservation for whites while excluding blacks from membership of registered trade unions. The Minimum Wages Act No. 27 of 1925 gave the Minister for Labor the power to force employers to give preference to whites when hiring workers, while the Mines and Works Amendment Act No. 25 of 1926 reinforced a color bar in the mining industry, while excluding Indian miners from skilled jobs.