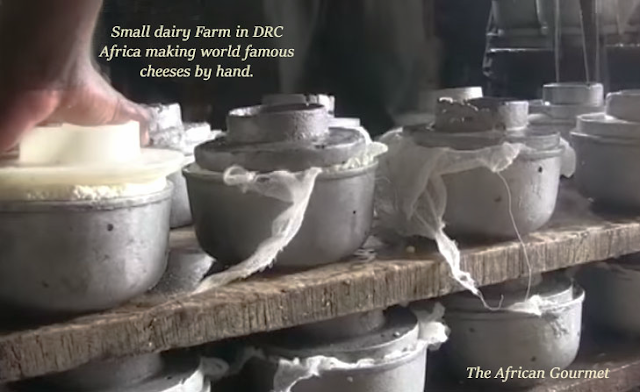 The Democratic Republic of Congo may not be the first country you think of when it comes to cheese making and cheese is not a part of the traditional African diet. In 1970, Italian cheese makers began teaching local farmers the art of cheese making utilizing cows and their milk that are a traditional part of DRC diet.

The history of Kivu cheese making today in the Masisi territory has produced hundreds of small family and company-owned dairy farms employing locals while teaching the fine art of cheese making. African Ndama and Zebi cows along with European Friesians and Brown Swiss cows are the main milk providers in the Kivu cheese making process.


To produce Kivu cheese usually no modern equipment is used, just years of experience and know-how goes into the morning milking, by hand to converting the fresh milk into cheese. Kivu cheese produced by Masisi dairy farms is similar in tastes to Gouda cheese. Young Kivu cheese is a soft cheese mild in taste with a creamy texture.

Making cheese in Africa is not traditionally practiced despite an abundance of cows, goats and sheep in many African regions.