Where are the Pepper, Ivory, Gold and Slave Coast of Africa

Where are the Pepper, Ivory, Gold and Slave Coast of Africa

The Berlin Conference was not the start of the "Scramble for Africa," history shows that the first areas to be settled in the African regions were those along the shoreline.

French and Portuguese explorers in the early 16th century divided the countries of the west coast Africa into four coasts according to the trade economy, the Ivory Coast, Grain Coast or Pepper Coast, Gold Coast, and Slave Coast.

The Grain Coast, Malaguetta Coast or Pepper Coast is the former name of a part of the Atlantic coast that is roughly identical with the coast of modern Liberia.

The Gold Coast was the former unofficial name for present-day Ghana in West Africa. The Gold Coast is so-called because it was an important source of gold for the British, Portuguese, and Dutch traders.

The Slave Coast is a historical name formerly used for parts of coastal West Africa from present-day Nigeria, Togo, and along the Bight of Benin. The Slave Coast was a major source of African slaves during the transatlantic slave trade from the16th to 19th century largely by the British, French, Portuguese, and Spanish.

The Berlin Conference did not initiate European colonization of Africa. Following the close of the conference, European powers expanded their claims in Africa such that by 1900, European states had claimed nearly 90 percent of African territory.

The Berlin Conference is also known as the Congo Conference meet Nov. 15, 1884, to Feb. 26, 1885 for a series of negotiations Berlin Germany. The major European nations met to decide to carve up Africa based on their needs not knowing or caring the trauma they were inflicting on the people of Africa.

Africa suffered and is still suffering from ethnic division. Numerous tribes were cut off from their relatives in a neighboring country. Similarly, numerous Africans were forcefully separated from fellow Africans by the way of slavery. The coming together of Africa is a healing process from which Africans will benefit, relatives and long separated ethnic groups will be united. 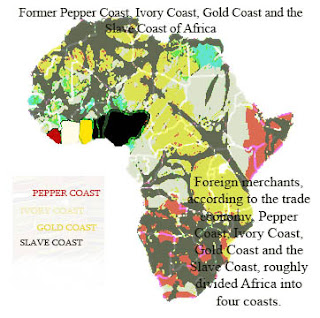 The Gold Coast, Ghana, in the 1950s was a country with the highest level of education in the whole of Sub-Saharan Africa.

African people are extremely diverse within each African country. Made up of numerous tribes and people of many religious, social and ethnic groups within the geographical boundaries of the African country African borders are at times arbitrary.

French and Portuguese explorers in the early 16th century divided the countries of the west coast Africa into four coasts according to the trade economy, the Ivory Coast, Grain Coast or Pepper Coast, Gold Coast, and Slave Coast.

Conflict-minerals have fueled and continue to help fund and sustain armed violence in Africa. Companies that are required to file a Conflict-Minerals Report must exercise due diligence on the source and chain of custody of their conflict minerals.

In 2010, Congress passed the Dodd-Frank Act, which directs the U.S. Securities and Exchange Commission (SEC) to issue rules requiring certain companies to disclose their use of conflict minerals if those minerals are “necessary to the functionality or production of a product” manufactured by those companies. Under the Act, those minerals include tantalum, tin, gold or tungsten.

Congress enacted Section 1502 of the Dodd-Frank Act because of concerns that the exploitation and trade of conflict minerals by Militia and corrupt businesspersons is helping to finance conflict in the Democratic Republic of the Congo and its neighbors by contributing to war and human misery of millions.

Conflict Mineral as defined in the Dodd-Frank Act, Section 1502(e)(4) means: (A) columbite-tantalite (coltan), cassiterite, gold, wolframite, or their derivatives; or (B) any other mineral or its derivatives determined by the Secretary of State to be financing conflict in the Democratic Republic of the Congo or an adjoining country.

Under Section 1502, a company that uses conflict minerals is required to conduct a reasonable country of origin inquiry that must be performed in good faith and be reasonably designed to determine whether any of its minerals originated in the covered countries or are from scrap or recycled sources.

Companies that are required to file a Conflict Minerals Report must exercise due diligence on the source and chain of custody of their conflict minerals.

According to Apple's 2015 Conflict Minerals Report released in March 2016, Apple has all smelters and refiners in Apple’s supply chain participating in a Third Party Audit program.

Third-Party Audits typically involve an examination of individual purchasing transactions on a sample, basis to assess the reasonableness and effectiveness of conflict mineral sourcing practices at the particular smelter or refiner. Apple principally supports the work of the Conflict-Free Sourcing Initiative or CFSI.

Apple states in 2016,” it focused its attention to two key areas: enhancing due diligence in the gold supply chain and helping improve local incident reporting and issue resolution.

Apple plans to continue to review in detail credible reports of incidents in the Democratic Republic of the Congo and neighboring countries that may potentially connect to Apple’s supply chain and confirm the transparent reporting and resolution of any incidents related to armed groups where these incidents may reasonably relate to its supply chain.”

Additionally, Apple stated it intends to further its efforts to drive smelters and refiners to comply with Third-Party Audits, and Apple will continue to remove from its supply chain those smelters or refiners that do not comply, the ultimate objective is protecting human rights in the African Region.