African proverbs about hope teach us hope is wanting something to happen and believing it could happen. But, what happens when you are tired of hoping?

You may believe hope has falsely presented itself as a beacon of light in a storm, allowing you to dream and think things will get better. So why hope? Hope allows people to believe who are currently in a dark place that the sun will eventually rise and the world is not a perpetual night. African proverbs about hope make known to us that there is more to life than what we see, hear, feel or taste. African proverbs on hope show us the four-letter word, hope,  is a necessary part of the human design.

Hold on to hope African Proverbs 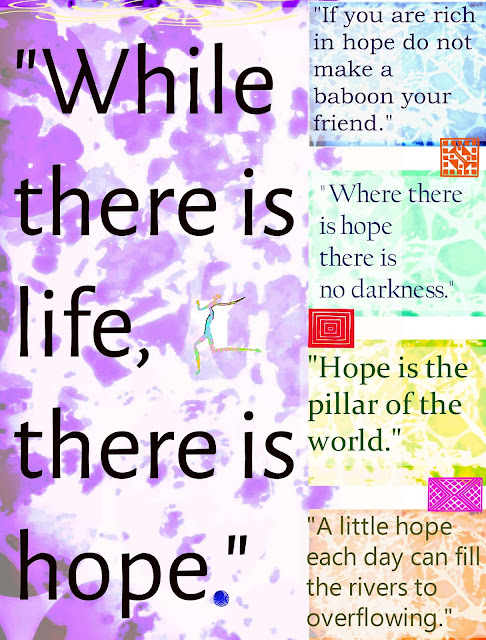 Hold on to hope African Proverbs

While there is life, there is hope.

A little hope each day can fill the rivers to overflowing.

Hope is the pillar of the world.

If you are rich in hope do not make a baboon your friend.


He who waits for dead men's shoes is in danger of going barefoot.
Going into a river upon a mud horse.
Better old clothes than a naked ass.
Better a chicken in the kitchen than a wild boar in the forest.
Better a bare foot than none at all.
Better are small fish than an empty dish.
A loose tooth and feeble friend are equally bad.
A mittened cat was never a good hunter.
He steals oil from one home in order to light a lamp in another.

African proverbs are meant to bring people together, read and study more proverbs, quotes, and sayings from the people of Africa.

Proverbs are the official language of the African Nation

Prepare the Mind for Elevation