Krispy Kreme Doughnuts in South Africa is not surprising since the diverse South African marketplace is home to many American food companies.

There are restaurants and retailers overseas that specialize in American style food such as Krispy Kreme doughnuts. Large well-known American retail and fast food companies see South Africa as a gateway into the growing African market. American businesses are looking to get into Africa to tap into emerging food and retail markets.

"Within five years we could be in five or six countries in Africa... this is the hottest new market in the world." Krispy Kreme's top South African executive Gerry Thomas said he plans to open 31 stores in prime locations in Africa in the next five years. "We like competition and maybe Starbucks will follow us to our locations," he said. 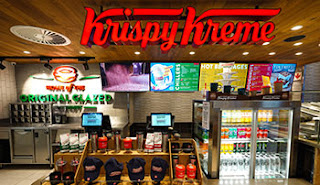