All About Voodoo African Batá Drums In Yoruba Africa 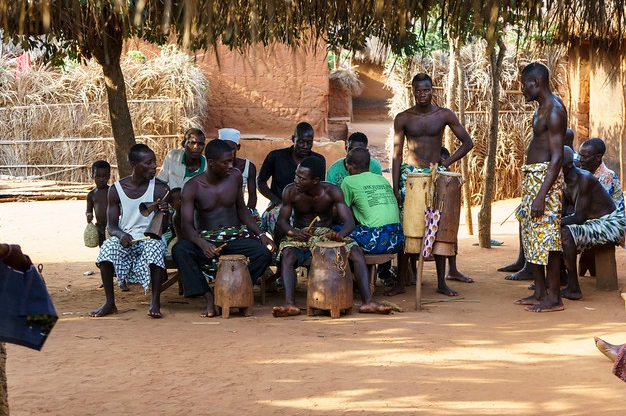 Batá drums are the voice of the Voodoo religion, batá are talking drums. Voodoo drumming and ceremonies are intimately linked in Africa.


Batá drums are a double-headed drum shaped like an hourglass with one cone larger than the other. The Batá drum is a percussion instrument used primarily for the use of religious or semi-religious purposes for the native culture from the land of Yoruba, located in Nigeria.

Batá drums are also the iconic symbol and sound of the Vodun or Voodoo religion. The talking drums express the histories of the West African Yoruba Oyo. Vodun is one of the world's oldest known religions.

It is commonly believed by academic researchers that these original drums were played to frighten those who would both make war with Oyo and those citizens who would oppose the king. Early Batá performances were likely held under the cover of darkness and often preceded parades of frighteningly dressed masqueraders called Egungun and Paraka.

Egungun and Paraka mean "powers concealed," is a Yoruba full body masquerade costume that provides an important connection between the worlds of the living and the dead. The body masks completely covered the dancer concealing their identity.

The common symbols were elephants, an ancient Yoruba emblem of power, lions representing bravery, crocodiles representing fierceness. Yoruba’s understand their existence as living in and acknowledging two worlds, the physical and supernatural. It is considered wise to acknowledge each sphere.