Wonderful Child is a delightful African folktale. Folktales reflect the morals, superstitions and customs of the African people. 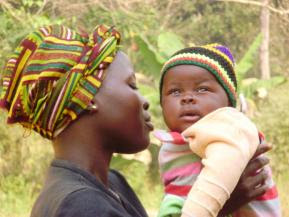 A man had two wives named Kengi and Gunga. One day he called them to him, and said that he was going to a nearby town to buy salt, and so might be away some time. He left them both well. Sometime after he had gone, Kengi became heavy with child. And Gunga asked her how it was that she was in that condition.

"It is true," said Kengi, "that I am with child; but never you mind. When the child is born, you will see that it is his."

"How can it be, when he has been gone so long?" said Gunga.

Now when the child was born, it carried with it a handful of hair. And all the people marveled. Then the child spoke, and said: "This is the work of God."

And the people ran away, they were so much afraid. And when the child grew up, he went into the woods to hunt elephants. And all this time the father had not returned.

One day the child killed an elephant, and came to tell his mother of his good fortune. They called the princes together; and then they went and cut up the elephant and divided it among the people. Then the people said that he was a. good child.

And now the father returned, and Kengi was afraid, and prayed Gunga not to tell him that the child was his.

And when the father came the boy went up to him, and said: "Father, give me your hand."

And the people all said: "He is your son by Kengi."

Then the son sings: "Now am I indeed dead, and will become a bird."

And hearing this, the father took his son to his heart, and gave him a wife, and made him chief over many towns.