Republic of Benin achieved independence in 1960


Explanation of the Republic of Benin Crest

The shield is broken into four quadrants:

The shield is supported by two leopards which are the national animal of Benin, the motto below the shields states Fraternité, Justice, Travail meaning Brotherhood, Justice, Work and the anthem of Benin: L'Aube Nouvelle (French) meaning The Dawn of a New Day. 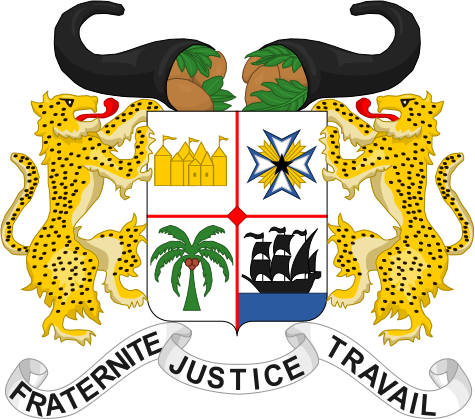 More About the people of Benin

The population is primarily located in the south, with the highest concentration of people residing in and around the cities on the Atlantic coast; most of the north remains sparsely populated with higher concentrations of residents in the west.

Benin has a youthful age structure with almost 65% of the population under the age of 25. Poverty, unemployment, increased living costs, and dwindling resources increasingly drive the Beninese to migrate. An estimated 4.4 million, more than 40%, of Beninese live abroad. Virtually all Beninese emigrants move to West African countries, particularly Nigeria and Cote d’Ivoire. Of the less than 1% of Beninese emigrants who settle in Europe, the vast majority live in France, Benin’s former colonial ruler.

With about 40% of the population living below the poverty line, many parents send their children, usually girls to work in wealthy households as domestic servants a common practice known as vidomegon. Male children are sent to work in mines, quarries, or agriculture domestically or in Nigeria and other neighboring countries. It is believed traffickers are taking advantage of the families’ poverty and exploiting the traditional system of vidomegon.

Unlike in other West African countries, where rural people move to the coast, farmers from Benin’s densely populated southern and northwestern regions move to the historically sparsely populated central region to pursue agriculture. Immigrants from West African countries came to Benin in increasing numbers between 1992 and 2002 because of its political stability and porous borders.

Talks continue between Benin and Togo on funding the Adjrala hydroelectric dam on the Mona River; Benin retains a border dispute with Burkina Faso near the town of Koualou; location of Benin-Niger-Nigeria tripoint is unresolved.