Kenya has one of the most culturally diverse populations in Africa. Kenyan tribes include, the Kikuyus, also known as Gikuyu, Luhya, Luo tribe, Kalenjin, the Kamba tribe, also called the Akamba, Kisii, Maasai, and the Meru. 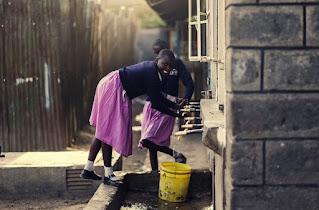 
Kenyan Tribes Facts Capital: Nairobi Area: 580,367 sq. km (slightly more than twice the size of Nevada) Population: 45 million.
There are over 40 Kenya tribes; indigenous tribes of Kenya fall into three ethnic groups, namely: the Bantus, the Cushites and the Nilotes. 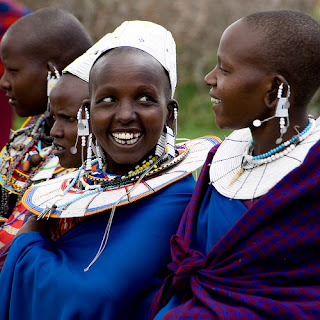 The Kikuyus, also known as Gikuyu or Agikuyu, make up Kenya’s largest ethnic group around 22%.The Kikuyu tribe is a Bantu tribe that neighbors the Embu, Mbeere and Meru tribes around Mount Kenya. Kikuyus speak the Kikuyu language, and most of them live around the fertile central highlands and Mount Kenya where they mainly grow tea and coffee. The Kikuyu tribe dominates leadership and politics in Kenya.

Luhyas are Kenya's second largest ethnic tribe making up around 14% of the population. The Luhya tribe, also known as the Abaluhya, Baluhya, or Abaluyia, are neighbors to the Luo, Kalenjin, Maasai and Teso tribes. Although considered one tribe, the Luhya consist of over 18 small tribes, each speaking a different dialect of the Luhya language. The Bukusu and Maragoli are the two largest tribes within the Luhya tribe. Traditional bullfighting is a popular sport with some of the Luhya tribe. Luhyas are mainly agriculturists, growing sugarcane and other crops; most of the sugar eaten in Kenya is produced in Mumias, a Luhya land.

Luo tribe is a subgroup of the larger Luo society that is spread across Uganda, Tanzania, Sudan, Congo and Ethiopia. The Luo tribe is the third largest community in Kenya and makes up around 13% of the population. Luo people as an initiation to manhood remove six teeth from the lower-jaw.

The Luo community is a significant player in the Kenyan political scene. The late father of Barack Obama was from the Luo tribe. Fish and ugali are the staple foods of the Luo tribe.

Kalenjin is the fourth largest community in Kenya making up around 12% of the population. The Kipsigi’s are the largest of the Kalenjin group. Kalenjin’s are famously known as Kenyan running tribe. Many legendary Kenyan long distance runners are Kalenjin’s, they continue to dominate the marathon scene to this day.

The Kamba tribe, also called the Akamba are the fifth largest tribe in Kenya making up about 11% of Kenya's total population. Kamba people are gifted dancers, singers, woodcarvers and basket weavers. The Kamba men and women hold high seats in politics and leadership Kenyan political landscape.

The Kisii tribe are also known as the Gusii tribe. The Kisii live in the highlands in Nyanza, Western Kenya between the Luo and Luhya tribes. The Kisii are the sixth largest ethnic group, comprising about 6% of Kenya’s population. They are farmers and raises livestock on their densely populated farmlands. Classic Kisii foods are ugali, cassava, and matoke.

The Meru lives on the northeastern slopes of Mount Kenya and make up about 6% of Kenya’s total population. The name Meru refers to both the people and the location. The Meru are agriculturalists and coffee, tea and cotton are the most commonly grown cash crop. The Meru tribe is divided into subtribes, Igemebe, Igoji, Imenti, Miutuni, Muthambi, Mwimbi, and Tigania. The Chuka and Tharaka are considered part of the Meru tribe but they have different oral histories and traditions.

Other Groups of Kenya

African 15% and non-African 1% including the Maasai. The Maasai people of East Africa live in southern Kenya and northern Tanzania along the Great Rift Valley on semi-arid and arid lands. A majority of the Maasai population live in Kenya and small portions of Tanzania. The Maasai are a semi-nomadic people who adhere to traditional communal land; the concept of private ownership was a foreign concept to the Maasai people. Traditionally, the Maasai diet consisted of mainly meat, milk and blood from cattle. Maasai people drink blood only on special occasions.

Kenya is five times the size of Ohio slightly more than twice the size of Nevada.
The Kenyan Highlands comprise one of the most successful agricultural production regions in Africa.
Glaciers are found on Mount Kenya, Africa's second highest peak.
More than 40% of Kenyans are under the age of 15. Kenya in 1967 was the first sub-Saharan country to launch a nationwide family planning program.