African Folklore Why People are given a name 


Where did the custom of giving names at birth begin? The African Folklore Why People are given a name explains.


Why People Are Given A Name African Folklore

The Great Soul sends his son to earth to see what is here. His son's name is Somebody.

Somebody goes about doing evil until he is captured by four old women. People call a meeting to talk to the wrongdoer, Somebody.

They decide to put Somebody to death. A little boy proposes, that, before killing him, they ask him for his last request.

Somebody answers, "I wish to have every man given a name, and to end the practice of calling me and everybody 'Somebody.' Then every deed may be attributed to its doer."

The wisdom of this reply gains for Somebody his release, and for every man a name.

Africa is surrounded by water from all directions as well as stories from African tribal people.
Africa is a continent with more unknown folktale stories than known. 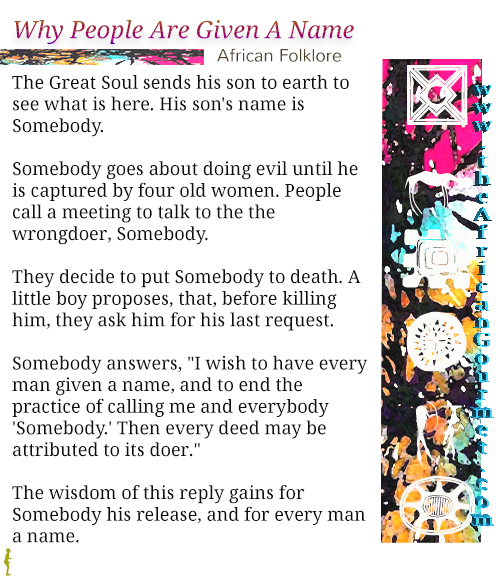