Ujeqe is versatile African steamed dumpling and goes well with any soup, stew, BBQ, curry or side dish. Ujeqe is made similar and tastes like Chinese, Vietnamese and Indian steamed buns. 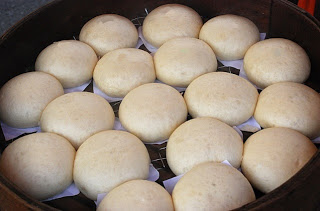 In a bowl add water, yeast and sugar, let stand 3 minutes. In a large bowl, sift dry ingredients together. Beat eggs into yeast mixture and stir gradually into the dry mixture. Add enough additional water if needed to make a stiff dough that doesn't stick to the sides of the bowl.

With damp hands, shape dough into a semi-flat circle, and place into a greased steamer. Steam until cooked through, about 45 minutes. Dumpling is done when a knife stuck into the center comes out clean. Serve with any dish!