What is a hero? A hero is a person who is admired for their courage, successes, and honorable ideals and talents. The list of African heroes is long however, Kwame Nkrumah, Patrice Lumumba, Wangari Maathai, Steve Biko, Nelson Mandela and Jomo Kenyatta are six black African heroes from Africa's history who have changed the course of Africa. 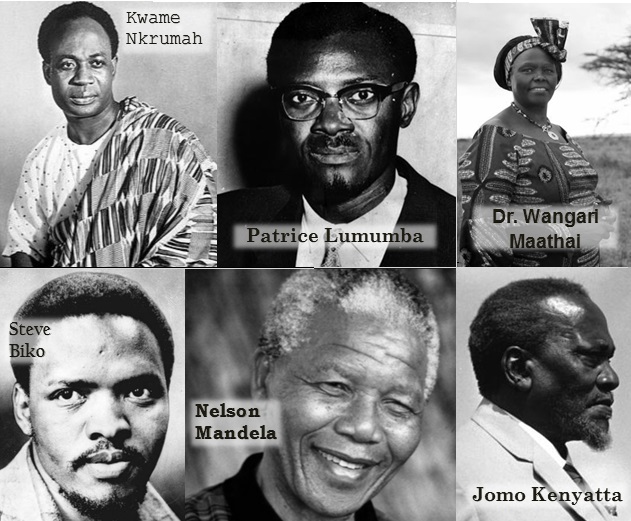 In Africa, Ghana was the first to achieve independence in 1957.The new nation's most influential figure was its prime minister, later president, Kwame Nkrumah. Ghana's route to independence became the model for the rest of the continent. "We face neither East nor West: we face forward." -Kwame Nkrumah

Patrice Émery Lumumba was a Congolese independence leader and the first democratically elected leader of the Congo (now the Democratic Republic of the Congo) calling for national unity and overall African independence. “Third World is a state of the mind and until we change our attitude as Africans, if there is a fourth, fifth and even sixth world, we will be in it.” -Patrice Lumumba

Dr. Wangari Maathai was a Kenyan environmental activist who founded the Green Belt Movement. She became the first African women to receive the Nobel Peace Prize in 2004 and the first woman in East and Central Africa to earn a doctorate degree. "I kept stumbling and falling and stumbling and falling as I searched for the good.’Why?' I asked myself. Now I believe that I was on the right path all along, particularly with the Green Belt Movement, but then others told me that I should not have a career, that I should not raise my voice, that women are supposed to have a master. That I needed to be someone else. Finally, I was able to see that if I had a contribution I wanted to make, I must do it, despite what others said. That I was OK the way I was. That it was all right to be strong." -Dr. Wangari Maathai

Steve Biko was one of South Africa's most significant political activists and a leading founder of South Africa's Black Consciousness Movement. His death in police detention in 1977 led to his being hailed as a martyr of the anti-Apartheid struggle. "The basic tenet of black consciousness is that the black man must reject all value systems that seek to make him a foreigner in the country of his birth and reduce his basic human dignity." -Steve Biko

Nelson Rolihlahla Mandela was a South African political activist, Nobel Peace Prize winner and in 1994, he became the first President of South Africa to be elected in fully representative democratic elections. In 2009, the United Nations declared July 18 as Nelson Mandela Day to honor Nelson Mandela’s lifelong dedication to helping the human race throughout South Africa and by extension the world. "I hate race discrimination most intensely and in all its manifestations. I have fought it all during my life; I fight it now, and will do so until the end of my days." -Nelson Mandela

On December 12, 1963, Kenya became the 34th African state to gain independence. Jomo Kenyatta was a Kenyan statesman and the dominant figure in the development of African nationalism in East Africa. His long career in public life made him the undisputed leader of the African people of Kenya in their struggle for independence. "God said this is our land, land in which we flourish as people... we want our cattle to get fat on our land so that our children grow up in prosperity; and we do not want the fat removed to feed others." -Jomo Kenyatta