Instead of using smelly rubs and decongestants which may raise blood pressure, to clear nasal and sinus congestion try chamomile flower steam. Chamomile is an age-old medicinal plant used by everyone from the ancient Egyptians to modern-day naturists. 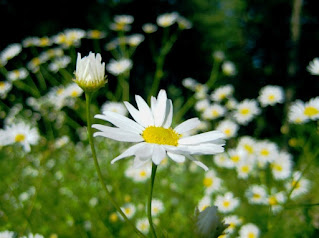 Place dried chamomile flowers in a large bowl and pour boiling water over flowers. Place your head over the bowl and place a towel over your head so that it also covers the bowl and inhale deeply for 2-3 minutes.

Chamomile flowers have white flower petals and yellow centers and are a lovely little medicinally an aromatic plant with fernlike leaves. The central yellow cone of the chamomile flower is the medicinal part of the plant.

Dried flowers are used in aromatherapy, tea and beauty products. African herbalists built their houses so that the entry room opened on a garden of herbs that would yield up their essential oils under the gentle insistence of the warm African sunshine. The ancients had great faith in the efficacy of breathing aromatherapy to preserve the health of mind and body for themselves and the village.

Not only did they grow the flowering herbs in their garden for their attractiveness, and odor, but also for charms in symbolism, and superstitions. There still is a strong assertion with Africans, plants, and herbs used as natural medicine.

Chamomile is often called the herbalist's plants because of a belief that it will revive drooping plants when placed near them. Ancient Egyptians worshiped chamomile above all other herbs because of its healing properties.

In later times, the dried herb was smoked in a pipe to relieve asthma. chamomile tea was then used for a sedative and for fevers as now in gentle herbal therapy. Chamomile flowers symbolized long life, wisdom, and patience.

A great part of the joy in growing herbs is the harvest season for drying herbs. Your harvesting will consist of gathering, drying and storing the leaves, flowers, seeds, and roots of those herbs you want to preserve for future use.

There is a crucial time when the herbs are just ready to be gathered when they contain the greatest amount of essential oils, those precious oils that furnish the fragrance and taste. Just as the flower buds are ready to blossom out, the plants are richest in oils, some even increasing in an amount just at the time of flowering.

The flowers of the herbs, such as chamomile are dried by cutting off just the heads and spreading them thinly on the screens or racks. The yellow part of the chamomile blossom contains the essential oils that are desired. The time for completely drying the flowers will be two weeks or longer.

Chamomile tea which, sweetened with sugar and cream, is served today in some exclusive New York beauty parlors, and suggests that its use is not different from that tea brewed to soothe the nerves of court beauties in Egypt.

To make it, first grow good organic chamomile in your own garden. Remove and dry the flower heads as they come into bloom. Pour one-quart boiling water on less than half an ounce of dried chamomile flowers. Let stand fifteen minutes, strain, sweeten with honey or sugar, and take at bedtime as a sure preventative of nightmare and for a quiet sleep.

The word chamomile is derived from the Greek roots chamos (ground) and melos (apple), referring to the fact that the plant grows low to the ground, and the fresh blooms have a pleasing apple scent.