Following the Money Trail in Africa

At a conference in London in June 2003, a Statement of Principles to increase transparency of payments and revenues in the extractive sector was agreed, The Extractive Industries Transparency Initiative, or EITI was born.

EITI, is a voluntary, global effort designed to strengthen accountability and public trust for the revenues paid and received for a country’s oil, gas and mining. EITI is a global coalition of governments, companies and civil society working together to improve openness and accountable management of revenues from natural resources.
BP plc formerly BP, British Petroleum, is a British multinational oil and gas company headquartered in London, England is an originating member of EITI. Additional current oil companies partnered with EITI are Hess, Chevron, ExxonMobil, Royal Dutch Shell plc, Vale, Tullow oil, Qatar Petroleum, Maersk Oil, Lundin Petroleum AB, Noble Energy, and Dana Petroleum. The EITI stresses the importance of transparency by governments and companies in oil, gas and mining industries and the need to enhance public financial management and accountability.
EITI Compliant Countries have fully and to the satisfaction of the EITI board completed the four sign-up steps as an EITI Candidate. EITI establishes deadlines for publishing the first EITI Report and undertaking validation of the report.
The first EITI report must be published within 18 months and begin validation within two and a half years. There are a number of issues with the reporting requirements of EITI. The Africa Progress Report 2013 states “Reporting requirements on licenses and individual contracts need to be more stringent, and state-owned companies should be required to disclose not just the names of companies bidding for concessions and licenses, but also the beneficial ownership of those companies.

The EITI should also adopt the central principle of Section 1504 of the US Dodd–Frank Act, which requires companies to report on their payments on a project-by-project basis, rather than by providing aggregate national-level reporting a practice that can obscure potential sources of corruption and revenue diversion.” 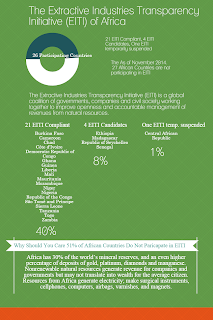 The Extractive Industries Transparency Initiative (EITI ) of Africa  as of November 2014. Countries  not listed are not participating in EITI  data on financial management, accountability and transparency.