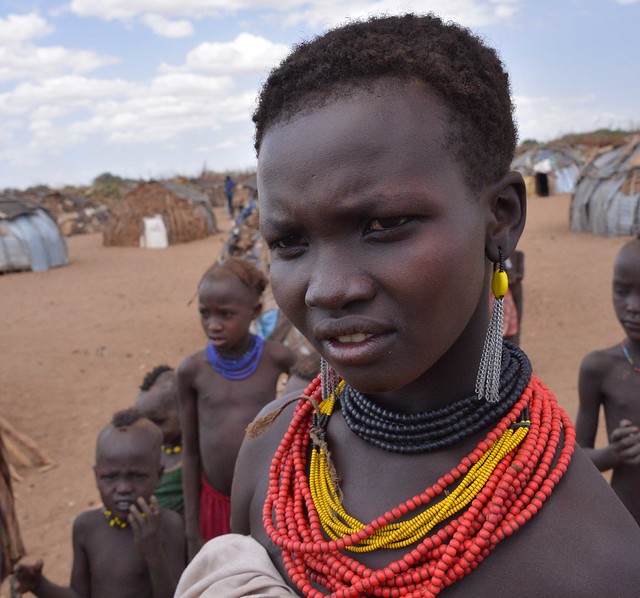 She may look beautiful, but she will kill you.

Mbotu was a very famous king of Old Town, Calabar. He was frequently at war, and was always successful, as he was a most skillful leader. All the prisoners he took were made slaves. He therefore became very rich, but, on the other hand, he had many enemies.

The people of Itu in particular were very angry with him and wanted to kill him, but they were not strong enough to beat Mbotu in a battle, so they had to resort to sneakiness.

The Itu people had an old woman who was a witch and could turn herself into whatever she pleased, and when she offered to kill Mbotu, the people were very glad, and promised her plenty of money and cloth if she succeeded in ridding them of their worst enemy.

The witch then turned herself into a young and pretty girl, and having armed herself with a very sharp knife, which she concealed in her bosom, she went to Old Town, Calabar, to seek the king.

It happened that when she arrived there was a big play being held in the town, and all the people from the surrounding country had come in to dance and feast.

Oyaikan, the witch, went to the play, and walked about so that everyone could see her. Directly she appeared the people all marveled at her beauty, and said that she was as beautiful as the setting sun.

Word was quickly brought to king Mbotu, who, it was well known, was fond of pretty girls, and he sent for her at once, all the people agreeing that she was quite worthy of being the king's wife.

When she appeared before him he fancied her so much, that he told her he would marry her that very day. Oyaikan was very pleased at this, as she had never expected to get her opportunity so quickly.

She therefore prepared a meal for the king, into which she placed a strong medicine to make the king sleep, and then went down to the river to wash.

When she finished it was getting dark, so she went to the king's compound, carrying her dish on her head, and was at once shown in to the king, who embraced her affectionately.

She then offered him the food, which she said, quite truly, she had prepared with her own hands. The king ate the whole dish, and immediately began to feel very sleepy, as the medicine was strong and took effect quickly.

They retired to the king's chamber, and the king went to sleep at once. About midnight, when all the town was quiet, Oyaikan drew her knife from her bosom and cut the king's head off.

She put the head in a bag and went out very softly, shutting and barring the door behind her.

Then she walked through the town without anyone observing her, and went straight to Itu, where she placed king Mbotu's head before her own king.

When the people heard that the witch was successful and that their enemy was dead, there was great rejoicing, and the king of Itu at once made up his mind to attack Old Town, Calabar.

He therefore got his fighting men together and took them in canoes by the creeks to Old Town, taking care that no one carried word to Calabar that he was coming.

The morning following the murder of Mbotu his people were rather surprised that he did not appear at his usual time, so his head wife knocked at his door. Not receiving any answer she called the household together, and they broke open the door.

When they entered the room they found the king lying dead on his bed covered in blood, but his head was missing. At this a great shout went up, and the whole town mourned.

Although they missed the pretty stranger, they never connected her in their minds with the death of their king, and were quite unsuspicious of any danger, and were unprepared for fighting.

In the middle of the mourning, while they were all dancing, crying, and drinking palm wine, the King of Itu with all his soldiers attacked Old Town, taking them quite by surprise, and as their leader was dead, the Calabar people were very soon defeated, and many killed and taken prisoners.


80 African Short Story Folktales you need to read today. Read for the love of culture. African Folklore An African folktale story less home is just a sad house with walls, a floor, and a roof.