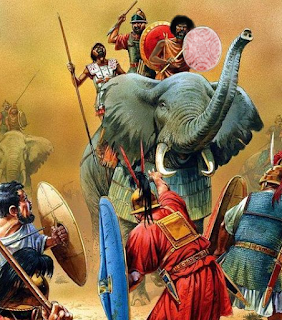 Hannibal Barca 247-183 BC was a Carthaginian general during the Second Punic War between Carthage and Rome, 218-202 BC and was one of the greatest African military commanders in world history.

His father was Hamilcar Barca, 275-228 BC, the great general of the First Punic War 264-241 BC died command of the army passed to Hasdrubal, Hamilcar's son-in-law for eight years but Hasdrubal was assassinated. When news of his brother-in-law death reached the armies, the soldiers unanimously have chosen Hannibal, age 21, as their commander.

Hannibal streamlined his aggressive means of warfare and on assuming the command he at once rode out to conquer the Olcades and soon made himself master strategy by a series of intelligent and formidable assaults which the Olcades were overwhelmed and surrendered to the Hannibal and the Carthaginians. Hannibal is considered one of the greatest generals of antiquity and his tactics are still studied and used in the present day.

In 219 BC the Romans took over the city of Saguntum, near the modern town of Sagunto in the province of Valencia, Spain. The Romans, ignoring their treaty with the Carthaginians installed a coup d'état.

Because of this, the capture of Saguntum was essential to Hannibal's plan and Hannibal conquered and destroyed the city Saguntum. The Saguntines turned to Rome for aid, but none was sent. In 218 BC after enduring eight months of siege the Saguntines' last defenses were finally overrun. This was the start of the 2nd punic war.

Hannibal's crossing of the Alps in 218 BC second Punic war is one of the most celebrated achievements of any military campaign. The Romans mistakenly presumed that the Alps created a secure natural barrier but they did not count on Hannibal's tenacity and intelligence.

Hannibal occupied much of Italy for 15 years but was unable to march on Rome. Hannibal's army numbered 38,000 infantry, 8,000 cavalry, and 38 elephants, almost none of which would survive the harsh conditions of the Alps.

An enemy counter-invasion of North Africa forced him to return to Carthage, where he was decisively defeated by Scipio Africanus at the Battle of Zama. Military historian Theodore Ayrault Dodge, who fought as a Union officer in the American Civil War called Hannibal the father of strategy, because his greatest enemy, Rome, came to adopt elements of his military tactics in its own strategic arsenal.

Hannibal remained true to the vow he had taken when young with his father by his side on the altar at the age of nine. Until his death, he remained an enemy of Rome and his name is remembered as Rome's greatest enemy even to the present day.

Did you know?
No surviving ancient biography on the subject of Hannibal has ever been found.