Three Zulu African proverbs why you need to fear a snitch, trader and bad influence with proverb meanings and explanations.


Fear the Snitch African Proverbs purpose is to let the reader know the danger that lurks and to sound the alarm so that every person may be on his or her guard prepare against a friendly foe. 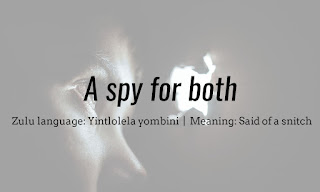 Yintlolela yombini
A spy for both.
Meaning: Said of a snitch. 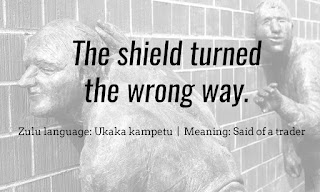 Ukaka kampetu
The shield turned the wrong way.
Meaning: This saying is applied to anyone who goes over from one party to another. It is a common expression for one who turns evidence against accomplices in crime. 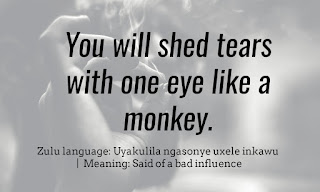 Uyakulila ngasonye uxele inkawu
You will shed tears with one eye like a monkey.
Meaning: A warning used to deter anyone from being led into a snare of any kind. It is said that when a monkey is caught in a trap he cries, but that tears come out of one eye only.