Fog and Volcanoes in the African Desert

Fog and Volcanoes in the African Desert. 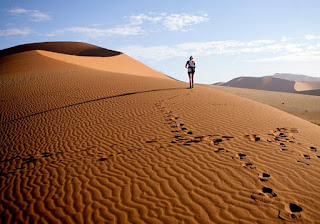 Namib desert sands and the Atlantic Ocean coastline makes the Namib the only coastal desert in the world that includes extensive sand dune fields influenced by fog.


Fog on the Namib Desert is the primary source of water creating a unique environment in which numerous penguins, invertebrates, reptiles, and animals adapt to an ever-changing climate.

The huge Messum crater was possibly created by a meteor millions of years ago reveals geologic clues linking this area to Brazil prior to the continental drift. The crater was named after Captain W. Messum, an explorer of Southern Africa until around 1849.

There are currently no active land volcanoes. The Brukkaros Mountain in the Karas Region, Namib desert is an extinct volcano that was used as a base for astronomical observation by the Smithsonian Institute in the 1930s.

The icy, north-flowing Benguela Current and high-pressure atmospheric conditions are responsible for the extremely low rainfall and contribute to the regular occurrence of fog along the coast.

The cold Benguela current originates in the Antarctic regions and carries dense cold polar water up to the Southern African West coast.


The desert plain takes two forms: extensive sand seas, including the highest dunes in the world 984 feet or 300 meters and stony deserts.

Vast stretches of this plain are almost bare with no vegetation, except in the south, where there is a light cover of low succulent shrubs and lichens sustained by fog. Unlike the Namib, the Kalahari Desert of eastern Namibia is well vegetated, despite its deep sands and absence of surface water. These sands are often in the form of parallel stabilized fossil dunes.