Injera is traditionally eaten in the African countries of Ethiopia and Eritrea. 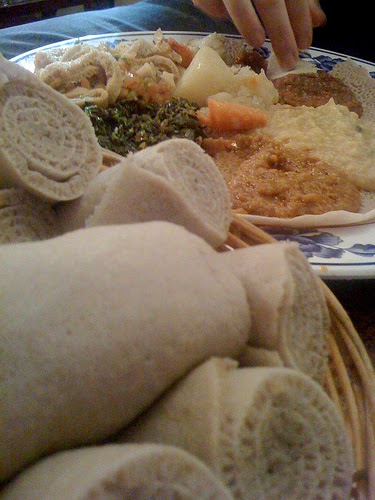 In the African countries of Sudan, Ethiopia, Eritrea, Kenya, and Djibouti use Teff grass to make flour. Teff flour can be used in a number of things such as cereal, bread, cookies, and other snacks. Today the African Gourmet will be teaching you how to make Ethiopian flatbread called injera bread.


About Teff Flour
Teff flour is light whole grain flour you can substitute whole wheat flour in the recipe but the taste will be different. The taste and texture on injera, however, are quite unique and unlike the crepe. Injera bread is thicker than a crepe but thinner than a pancake. Injera is eaten daily in all most every household.

Teff Grass Bread Making in Ethiopia and Eritrea
Teff is a staple crop in Eritrea and Ethiopia where it is a native annual grass species but is not widely known around the world. The very small seeds are cooked or fermented and have good nutritional content. Teff grass is a warm-season annual grass traditionally used as a grain and forages in Ethiopia it is adapted to the high-altitude tropics growing well at temperatures 50 to 85° but requires an 11 to 13 hours to flower.

Teff grass was introduced to the United States in the late 50s early 60s but still largely remains unknown. In the USA, teff grass is getting a lot of popularity as a late and for some very good reasons. Farmers in Oklahoma, Texas and New England were trying to look for alternative ways to make up for a fodder grazing and hay shortage. Teff grass is a warm-season grass with a very fine stem super high-quality hey type product. Horse people love teff grass because of his extreme palatability.

Because of its fine stem, Teff grass needs to have at least 65 to 70 degrees soil to plant. The seed size is very tiny so you cannot plant very deep or it's not going to grow. It grows extremely well in the heat has exceptional drought tolerance. Teff is a rapid drying grass, unlike sorghum. Teff grass grows so well in optimal conditions, in 23 days the grass can grow 20 inches tall. To see if Teff grass is going to be major forage crop in the USA, well it depends on how the market responds.

Farmers in the United States may be new to planting Teff however in other parts of the world it has been around for thousands of years. Teff is believed to have originated in Ethiopia between 4000 and 1000 BC; the seeds were discovered in a pyramid and 3359 BC. Since then the seeds have been widely cultivated and is used not only in Ethiopia but in neighboring African countries as well.

Injera is made using teff flour, this ancient grain has a lot of fiber and protein and iron in it and it is a great nutritional source. Now making Injera bread is an overnight process and for best results, a three-day process because you want to get a nice sourdough type flavor. You can use water in your recipe but you can use flat beer, specifically dark beer for a nice rich flavor.