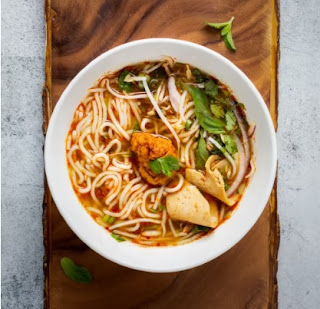 Just like the rest of the world, ramen noodles are a wildly popular recipe ingredient in Africa.  The sapid favor of peppered goat meat mixed with ramen noodles is not your ordinary ramen noodle meal which makes this unique African hot ramen noodles stir fry recipe made with pepper goat a West African favorite meal. Five main facts about goat meat. 1. The female goat is used in most recipes because the meat from female goats is tenderer. 2. Cabrito stands for meat from goat kids 4-8 weeks of age while Chevon is meat from an older goat weighing around 48-60 pounds or 6-9 months old at the time of butchery. 3. Goat meat is unique in flavor and palatability. 4. Goat meat is leaner than many other red meats and is usually less tender. 5. Cook your goat meat the same way you like your steak; rare, medium, well-done or anywhere in between. Five Ramen Noodle Facts The birthplace of instant noodles was in Osaka Ikeda, a city in Osaka Prefecture, Japan where there is a museum dedica
Learn More
More posts