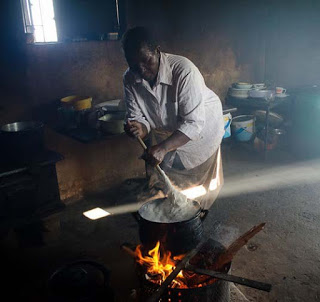 Portuguese Muamba Chicken Stew and Funge is a fresh take on food from Angola Africa. Muamba de Galinha also known as Muamba chicken stew is Portuguese chicken stewed in Muamba sauce. Making funge Angolan food is simple to make good and the classic national dish of Angolan Chicken Stew, flavored with garlic, hot chilis, pumpkin, okra, cooked in palm oil eaten with Funge, a cassava firm dough is one of the best food recipes Angola has to offer the culinary world. Portuguese is the official language of Africa's 7th largest county of Angola. In 1483 Portuguese arrive to the current most expensive captial city in the world, Luanda Angola. Portuguese food, culture and language still have major influence on Angolans. Angola's name is derived from the Portuguese from the title Ngola held by kings of the Ndongo. Ndongo was a kingdom in what is now northern Angola. In Angola, as in other countries of the globe, local products determine the culinary composition of the dishes. In addition
Learn More
More posts