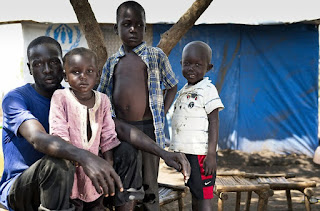 About the South African Anti‐Apartheid Song

Zulu is the language of the Zulu people. 10 million people speak Zulu, and most of them (95%) live in South Africa.

Senzeni na is a Zulu language South African anti-apartheid song. Apartheid is the Afrikaans name given by the white-ruled South Africa's Nationalist Party in 1948 for the institutionalized system of racial segregation.

The international community begun to take notice of Apartheid after white South African police opened fire on unarmed black protesters in the town of Sharpeville in 1960, killing 69 people and wounding 186 others.
Senzeni na, a powerful song was frequently sung during funerals and anti-apartheid demonstrations. Apartheid officially ended in 1994.
Senzeni Lyrics and English Translation.
Senzeni na Senzeni na? What have we done?
Sono sethu, ubumyama? Our sin is that we are black?
Sono sethu yinyaniso? Our sin is the truth.
Sibulawayo. They are killing us.
Mayibuye i Africa. Let Africa return.
African facts