Gift of a Cow Tail Switch is a true fascinating African folktale. 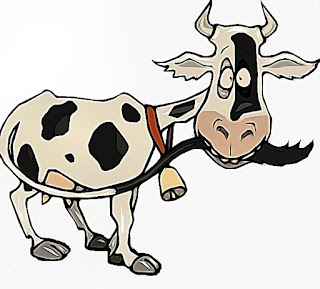 The child's older brothers, who were magicians, finally went forth to find him. They came upon his broken spear and a pile of bones.

The first son assembled the bones into a skeleton; the second son put flesh upon the bones; the third son breathed life into the flesh.

The warrior arose and walked into the village where there was great celebration. He said, "I will give a fine gift to the one who has brought me back to life."
Each one of his sons cried out, "Give it to me, for I have done the most."
"I will give the gift to my youngest child," said the warrior. "For it is this child who saved my life. A man is never truly dead until he is forgotten!"

What is a cow tail switch?
The hairs of a cow's tail forms a bushy tip called a switch. The cow uses this switch to swat flies and other insects annoying the cow. This bushy end of the cow’s tail is clipped, bounded together with rope and attached to a handle. A cow tail switch is an ancient fly swatter and the best natural indoor and outdoor insect control tool.